Akershus Fortress is a medieval castle that was built (starting around the year 1290) to protect Oslo, the capital of Norway, from raids by bloodthirsty Swedes. Later in its life, it was repurposed as a prison. Still later, it became a Cold War bomb shelter.

Now, it’s being repurposed once again, this time to help save the Norwegian capital from more insidious foes: pollution and global warming. Starting this month, electric car owners will be able to drive down a narrow ramp between rough-hewn rock walls dripping with condensation and plug in at one of 86 charging stations—for free. 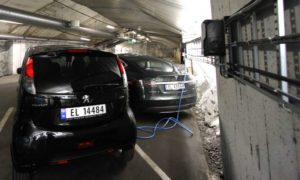 The facility will get plenty of use as Norwegians switch to electric vehicles faster than anyone else on the planet. More than a third of all new cars are either fully electric or plug-in hybrids, well over 10 times the proportion in the U.S.

With about 100,000 electrics on the road, Norway (population 5 million) trails only the U.S., China, and Japan in absolute numbers. By 2025, the government has suggested, there may be no gasoline- or diesel-powered cars sold in the country.

Of course, it shouldn’t be forgotten that, even as Norway tries to reduce emissions on the road, state-controlled oil company Statoil ASA is expanding oil exploration, pushing farther into the Arctic Sea. “We have a very hypocritical policy,” says Daniel Rees, an adviser on transportation and the environment for the opposition Green Party. “The government is trying to create this image that we are a leader in saving the world from climate change, when we are actually one of the main contributors to it.”

Others feel that, as long as a country is going to depend on oil revenues, the least it can do is to invest a portion of that money (a substantial portion, in Norway’s case) in creating a fossil fuel-free future for the entire world.