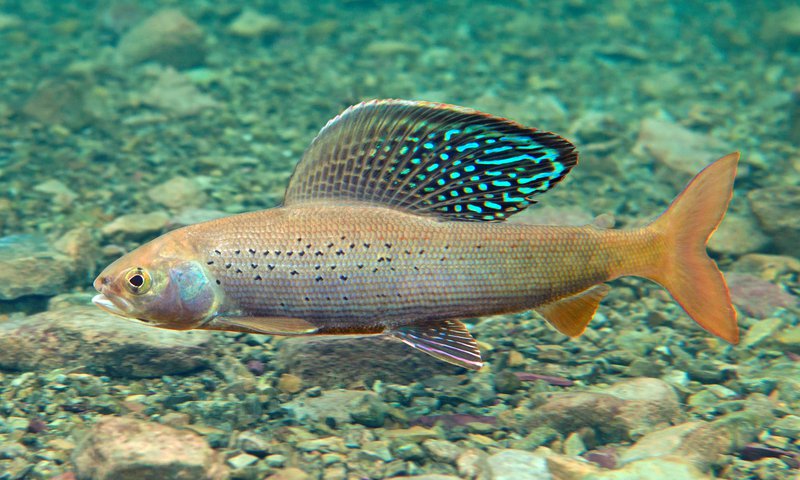 It’s been a little over a year since the Michigan Department of Natural Resources—in partnership with the Little River Band of Ottawa Indians (LRBOI)—announced a new initiative aimed at bringing back a long-gone historical species to the Great Lakes state: Arctic Grayling.

We first reported on the formation of this initiative here in REVITALIZATION back in the June 15, 2016 issue.

Michigan’s Arctic Grayling Initiative—so dubbed following the addition of more than 30 organizations to the DNR’s and LRBOI’s foundational partnership—is committed to re-introducing this culturally-significant species and has been making steady progress since last June to head down that path. 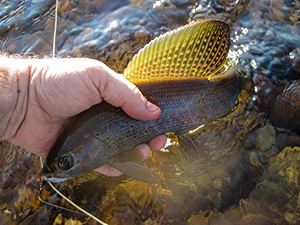 “Our formal mission as an initiative is to restore self-sustaining populations of Arctic Grayling within its historic range in Michigan,” said DNR Fisheries Division Assistant Chief Todd Grischke.

State-sponsored restoration initiatives like this one in Michigan are vital, since federal-level efforts are more likely to come and go with changes of political regimes. For instance, Montana has been trying to protect and restore the last remnants of their arctic grayling population. But in July of 2020, the Trump administration denied protection to the Montana arctic grayling, which is now found in just 4% of its historic range.

“Montana’s grayling hang by a thread,” said Noah Greenwald, endangered species director at the Center for Biological Diversity. “The Trump administration’s denial of protection puts politics over science and places these spectacular fish at immediate risk of extinction.”

Michigan’s history with the Arctic Grayling is long and storied. A striking fish with a sail-like dorsal fin and a slate blue color on its body, it was virtually the only native stream salmonid in the Lower Peninsula until the resident population died off nearly a century ago.

“The fact we have a town named after this fish indicates to me just how iconic it was and still is to many in this state,” Grischke said. “When you add in other factors – such as the fact they’re only native to Michigan and Montana out of all the lower 48 states – it just adds to their legendary status.”

In the 19th century, northern Michigan streams were filled with Arctic Grayling offering anglers plenty of opportunity to catch these unique fish. But a variety of factors slowly erased their presence, including the cutting of Michigan’s vast virgin forest in the 1800s.

“Logging practices during that time period used streams to transport trees that were harvested. The streams carried logs to mills for processing,” explained Grischke. “These practices greatly impacted the physical nature of those streams and basically destroyed stream habitats for fish, including grayling spawning areas.”

Additionally, the physical cutting of the trees caused blockages in many of those same streams, often displacing grayling from where they lived.

But this was just one issue that affected Michigan’s Arctic Grayling, yet another was the introduction of non-native fish species.

“Other types of trout were introduced into Michigan’s waters to create additional opportunities for anglers to pursue – but a consequence of this action was that grayling couldn’t compete with more aggressive fish like brown, rainbow or brook trout,” Grischke shared.

The final nail in the coffin was over fishing that occurred readily with people harvesting the grayling in large quantities with no possession limits or other regulations to stop them.

The last Arctic Grayling on record in Michigan were taken in 1936, but since that time natural resource managers have repeatedly looked for options to reintroduce it.

“In the late 1800s and early 1900s they tried stocking millions of Arctic Grayling fry into Michigan streams, but that didn’t work,” said Grischke. “And then in the 1980s we, the DNR, stocked hatchery-reared yearlings into lakes and streams, but again to no avail.”

In each of these previous re-introduction efforts something critical was missing that prevented these populations from flourishing, but Michigan’s Arctic Grayling Initiative hopes to rectify that.

“We have learned from the mistakes experienced during these previous re-introduction events and plan to capitalize on new approaches, dedicated partnerships, and advanced technology,” Grischke explained.

Much of the initiative’s focus is detailed in its official Action Plan, unveiled in July and reflective of the vast work to be done by the various partners. The group is gleaning as much information as possible from the state of Montana and their successful effort at re-establishing stable Arctic Grayling populations.

“Within our Action Plan we’ve identified four focus areas and associated goals that were developed by all the partners and that we believe will give us the best chance of success moving forward,” said Grischke.

The four focus areas on the Action Plan include research, management, fish production and outreach and education.

The research focus area will work on a variety of items; including understanding relationships between resident trout and grayling, prioritizing streams for grayling introduction, and evaluating in-stream Remote Site Incubators (RSIs). RSIs allow fish to be reared and released directly in the streams to better allow them to imprint to the waters they will hopefully reproduce in later on.

Better imprinting means the initiative will be one-step closer to establishing a self-sustaining population of Arctic Grayling, which is really the ultimate outcome of this effort.

Goals for the management focus area will include evaluating key habitat criteria, establishing population goals, and working on regulations related to fishing for grayling.

The fish production focus area’s work will center on experimenting with Remote Site Incubator designs, ensuring fish health standards are upheld, and maintaining a genetically diverse broodstock which will be housed at a hatchery facility.

Lastly goals for the outreach and education focus area will be concentrated on informing the public on this initiative’s efforts, identifying future partners, and creating a stewardship plan.

“The goals of these focus areas will be accomplished by partner representatives working together,” Grischke shared. “The only way this initiative will be successful is if we continue to work together towards our mission.”

Photo of a Montana arctic grayling is courtesy of Pat Clayton.