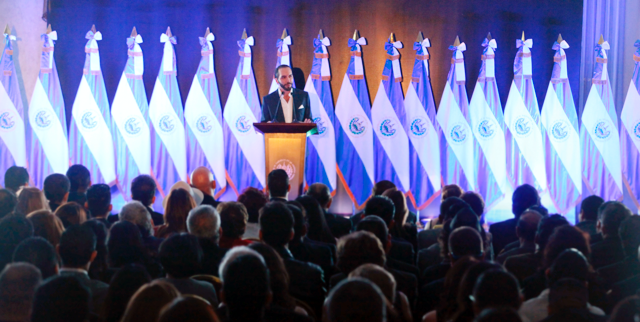 San Salvador is both the political and homicide capital of the Central American nation of El Salvador. Gangs have been running Mercado Central for years.

San Salvador’s young mayor, Nayib Bukele, is attempting to solve the problem of this rag-tag market, in part, by dismantling it. It is an ambitious project for Bukele, an upstart politician who, at 33, and with just three years of experience in public service, won the most important mayoral seat in the country in 2015.

Bukele’s strategy is to entice vendors to move by building new markets just outside the city center. Instead of haggling from makeshift stalls in the middle of pavements and roads, his plan would allow vendors to operate through leases, in safe and sanitary conditions.

The plan, known as the reordenamiento (reordering), also calls for the revitalization of the city center, where the country’s oldest and most majestic buildings – including the city’s main cathedral and national theatre – stand in disrepair, nearly forgotten.

Such an aggressive embrace of revitalization is Bukele’s way of addressing a fundamental disconnect between the rich and poor in Salvadoran culture, which he sees as one of the root causes of the country’s violence. Even those who oppose his policies concede that he is making profound changes, and speak of him with respect.

Photo by Idea SV via Wikipedia.

See full article by Lauren Markham in The Guardian.