On August 24, 2018, the Kahutia Accord MOU between Ngāti Kahungunu Iwi incorporated and Hawke’s Bay Regional Council was signed. It aims to plant millions of trees on the 250,000 hectares (625,000 acres) of erosion-prone land across Hawke’s Bay, New Zealand.

Ngahiwi Tomoana says the program’s key outcomes are to lift the overall productivity of the region through increasing the productivity of erosion prone land and reinvigorating both its freshwater and coastal marine environments. He’s convinced this program will increase employment numbers particularly in the Wairoa District but across the Kahungunu region. 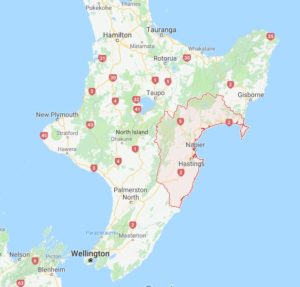 Hawke’s Bay is outlined in red.Image courtesy of Google Maps.

“Not only will we be healing the people but we’ll be healing the land, that’s significant in terms of our sustainability and prosperity” he continued.

Both Mr. Tomoana and Rex Graham, Chair of the Regional Council, say the program goes to the heart of the Regional Economic Development Plan, Matariki and Social Inclusion Strategy signed by all Hawke’s Bay’s local authorities and key Government agencies in 2017.

“The Kahutia Accord means the real work behind a reforestation programme can start now, to plant more trees to protect erosion prone land and enhance our environment. This will also establish an investment that benefit our ratepayers, the region and Ngāti Kahungunu over the long term,” says Mr. Graham.

Ngāti Kahungunu Iwi Incorporated has submitted a Provincial Growth Fund application to the Ministry of Business, Innovation & Employment and is awaiting a response. In the meantime both HBRC and NKII have initiated the necessary due diligence to ensure program success.

The Kahutia Accord is a formal partnership to assist the region to become New Zealand’s first carbon neutral province by 2040, a target highlighted in the Council’s Strategic Plan.