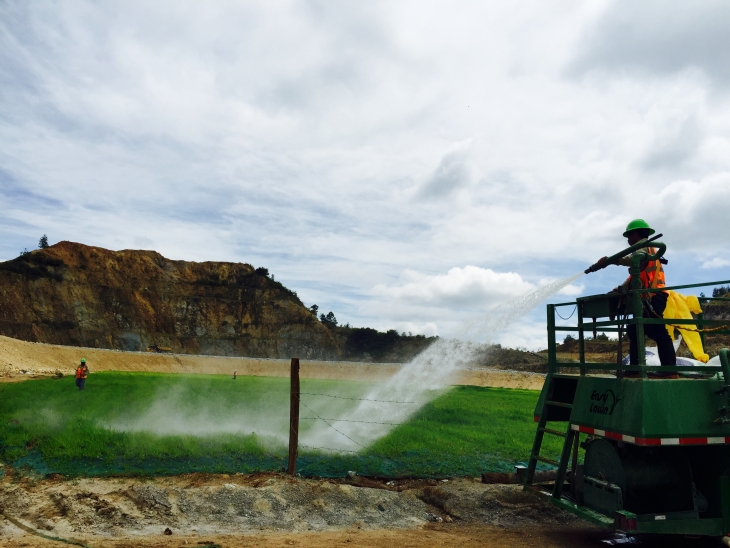 At the end of 2011, Goldcorp’s Marlin mine’s open pit closed. Well, technically the pit ceased operations, but this wasn’t the end of the Goldcorp story for the mine’s Guatemalan neighbours. In some ways, it was a beginning.

Mine closure is an inevitable phase of every mining project, and we had been preparing for its impacts from the start of operations at Marlin in 2007.

Those efforts in concurrent reclamation were recently recognized in a trio of awards: two from the American Chamber of Commerce, and a third from the Guatemalan Chamber of Construction. To cap off the accolades, in 2015 Marlin mine (operated by Goldcorp subsidiary Montana Exploradora) was recognized as one of 21 Socially Responsible Companies of Central America by the Economist.

This is the first large-scale mine remediation in the history of Guatemala, a complex project which will see the 230-metre pit filled and its slopes levelled and stabilized, then planted with trees and crops. Through these efforts, rock oxidation, a critical side effect of exposing subsurface rock to the atmosphere, has been prevented.

In accepting the Environmental award from the American Chamber of Commerce, Gustavo Gomez, the head of the Technical Closure department, said it recognized the teamwork of the approximately 100 people that have worked on back-filling the pit. “We are one of the first mines to have performed this type of closure, filling the open-cut pit to enable re-vegetation. We want to continue with our reforestation programs and the total recovery of the mine.”

By spring 2015, nearly 75% of the pit had been filled with nearly nine million tons of tailings and sterile fill.

By summer 2017, grass will be planted, then trees and crops, to create an appealing and productive environment that will encourage agricultural and economic development.