Millions of people watched the Philadelphia Eagles beat the New England Patriots at Super Bowl 52 in February. But for the host city of Minneapolis, Minnesota, the event was also a chance to showcase its newest sports venue and the urban revitalization that has come with it.

Anyone who pays close attention to urban revitalization activities in the U.S. knows that sports stadiums are frequently touted as magic revitalizers. This touting, of course, is usually done by professional sports leagues and the design/construction firms who hope to get the contracts. The over-the-top claims of public benefits that are often made derive from the desire of the franchise owners to get the public to subsidize their for-profit business.

Whether due to ignorance about how the revitalization process works, or due to strategic campaign donations (the innocent-sounding term we Americans use instead of “bribes”, to help convince ourselves that our government is cleaner than those of other nations), these projects often end up providing little public benefit at great public cost.

But, sometimes, as in Indianapolis, Indiana, sports stadiums actually do help trigger downtown revitalization. This is sometimes due to lucky timing, and other times due to good strategizing. The approach works best when the stadium is just part of a comprehensive revitalization process, and works worst when it’s all about the stadium.

The “critical mass” strategy—such as was effectively applied to Baltimore‘s Inner Harbor—is often best when trying to use a stadium to bring a dead neighborhood back to life. Simply put, the idea is to bring multiple redevelopment projects online simultaneously, so as to create a revitalized whole that’s more than the sum of its parts. This is as opposed to the haphazard project-by-project approach used by most cities, where one project dies waiting for support from the next project.

Whether through good strategizing or lucky timing, Minneapolis is one of the cities that successfully revitalized an area via a stadium, and they did it largely because they brought a critical mass of nearby redevelopment online at the same time. 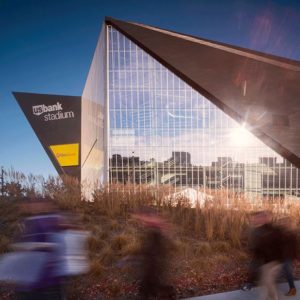 Completed in time for the 2016 football season, the 66,200-seat U.S. Bank Stadium sits at the edge of the central business district (CBD) of Minneapolis. In addition to delivering a state-of-the-art sports venue, the stadium has played a key role in sparking redevelopment projects throughout what is now a vibrant—and newly branded—East Town neighborhood.

“It was really important for us to create a project that was a catalyst to that whole portion of the downtown area,” says Bryan Trubey, principal and director of Sports and Entertainment at HKS Inc. The firm served as the project architect and master planner for the stadium, which is owned and operated by the Minnesota Sports Facilities Commission.

The HKS team says from the start that the $1 billion investment in the new stadium should generate at least four times that amount in additional direct economic real estate impact on the surrounding area. Given the development that has already been delivered, is underway, or is proposed, the city is already well on its way to achieving that goal, notes Trubey. “That is really what we are focused on in our practice is creating that kind of economic progression for all of our projects,” he says.

What also is notable is the speed at which that transformation has occurred. Oftentimes, what happens with a big investment in a new stadium is that the public waits for surrounding development to materialize in stages that takes years to complete.

The new stadium and Downtown East projects were both completed within less than five years, which—in urban development terms—is moving at light speed, adds Steve Cramer, president and CEO of the Minneapolis Downtown Council. Clearly, the stadium was a big part of that revitalization and it is now one of the iconic buildings in downtown because of its design and prominence, he says.

Now one of the most sought-after neighborhoods in Minneapolis, Downtown East offers easy access to a wide variety of popular dining and entertainment destinations. But the area directly surrounding the site of the new Minnesota Vikings stadium had long been overlooked, resulting in a sea of surface lots and underutilized real estate. Ryan Companies helped transform what was once a neglected space has now taken on new purpose as a vibrant extension of the downtown core.

Downtown East was the largest redevelopment project the City of Minneapolis had seen in decades. The once-in-a-century, $588 million, five-block Downtown East redevelopment completely reshaped the Minneapolis urban landscape by reconnecting the central downtown area to the new U.S. Bank Stadium, the University of Minnesota, the Mill District and the Elliot Park neighborhood.

The Minneapolis Downtown Council is a member-supported business organization focused on creating an extraordinary downtown for all who live, work, play and explore Minneapolis. They collaborate with public, private and non-profit organizations to create a vibrant atmosphere in the city’s core, advocate for initiatives that promote growth and stability, and forge a strong, inclusive 21st Century city.