Following this successful reintroduction program they are becoming a common sight once more in Aberdeen City and shire. The population has grown year on year with a minimum of 35 breeding pairs established in the north east by 2016. They now range from the edge of the Cairngorms National Park to Aberdeen City and have spread south into Angus. To date, Aberdeen area red kites have raised over 300 chicks in the wild.

To celebrate the 10-year anniversary of this restoration success, the Royal Society for the Protection of Birds (RSPB) has launched a red kite photo competition. 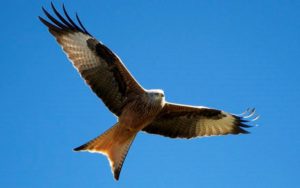 It was saved from extinction in the UK by one of the world’s longest running protection programs (in Wales), and has now been successfully re-introduced to England and Scotland. The population that survived persecution in the old oakwoods of mid-Wales has spread, and continues to go from strength to strength.

In England, the reintroduced birds can be found in the Buckinghamshire/Oxfordshire area, Hertfordshire, Northamptonshire, Yorkshire, Gateshead, Northumberland and the Newcastle area and Grizedale Forest in Cumbria.

The reintroduced Scottish population is centered around the release sites in Dumfries and Galloway, Stirling-shire and west Perthshire, around Black Isle in Ross-shire, and on the outskirts of Aberdeen City. Kites have also now been returned to Northern Ireland. 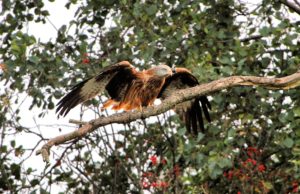 In the United Kingdom, red kites were ubiquitous scavengers that lived on carrion and rubbish. Shakespeare‘s King Lear describes his daughter Goneril as a detested kite, and he wrote “when the kite builds, look to your lesser linen” in reference to them stealing washing hung out to dry in the nesting season.

In the mid-15th century, King James II of Scotland decreed that they should be “killed wherever possible“, but they remained protected in England and Wales for the next 100 years, since people appreciated how they kept the streets free of carrion and rotting food. Under Tudor “vermin laws” many creatures were seen as competitors for the produce of the countryside and bounties were paid by the parish for their carcasses.

By the 20th century, the breeding population was restricted to a handful of pairs in South Wales, but recently the Welsh population has been supplemented by re-introductions in England and Scotland. In 2004, from 375 occupied territories identified, at least 216 pairs were thought to have hatched eggs and 200 pairs reared at least 286 young. In 1989, six Swedish birds were released at a site in north Scotland and four Swedish and a Welsh bird in Buckinghamshire.

Altogether, 93 birds of Swedish and Spanish origin were released at each of the sites. In the second stage of reintroduction in 1995 and 1996, further birds were brought from Germany to populate areas of Dumfries and Galloway. Ninety-four birds were brought from the Chilterns and introduced into the Derwent Valley in North East England between 2004 and 2006.

In Northern Ireland, 80 birds from wild stock in Wales were released over three years between 2008 and 2010, and in 2010 the first successful breeding was recorded. The reintroductions in the Chilterns have been a success. Between 1989 and 1993, 90 birds were released in the Chilterns Area of Outstanding Natural Beauty and by 2002, 139 pairs were breeding there. They can commonly be seen taking advantage of thermals from the M40 motorway.

Another successful reintroduction has been in Northamptonshire, which has become a stronghold for the red kite. Thirty Spanish birds were introduced into Rockingham Forest near Corby in 2000, and by 2010, the RSPB estimated that over 200 chicks had been reared from the initial release. So successful has the reintroduction been that 30 chicks have been transported from Rockingham Forest, for release in Cumbria.

A sighting of the first red kite in London for 150 years was reported in The Independent newspaper in January 2006 and in June of that year, the UK-based Northern Kites Project reported that kites had bred in the Derwent Valley in and around Rowlands Gill, Tyne and Wear for the first time since the re-introduction.

In 1999, the red kite was named “Bird of the Century” by the British Trust for Ornithology. According to the Welsh Kite Trust, it has also been voted “Wales’s favourite bird“.

In June 2010, the Forestry Commission North West England announced a three-year project to release 90 red kites in Grizedale Forest, Cumbria under a special licence issued by Natural England. The Grizedale programme will be the ninth reintroduction of red kites into different regions of the UK, and the final re-introduction phase in England.

Feature photo of red kite in Wales by Tim Felce via Wikipedia.