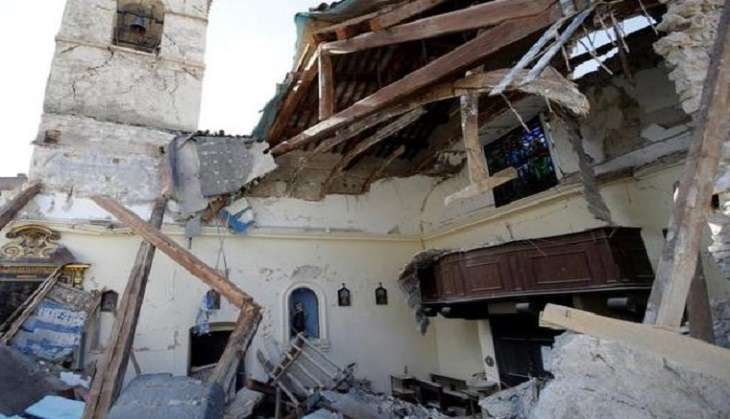 As we strolled along the main shopping street in Norcia, Corso Sertorio, Italy, the effects of the devastating October 30, 2016 earthquake, the strongest to hit Italy since 1980, were not immediately apparent. Most of the shops, though shut, seemed intact. Christmas lights were strung overhead.

The scenery changed dramatically when our guide, Benedict Nivakoff, 37, a Benedictine monk from Connecticut who is known in the local monastic community as Fr. Prior, led us to Piazza San Benedetto, the main square.

There, its dominant feature, the 14th Century Basilica of St. Benedict, the spiritual home of the Benedictines, lay in ruins. The bell tower had collapsed onto the roof, reducing the basilica to rubble. Only the basilica’s façade was standing.

Their brewery, housed in the remnants of a 13th Century barn, was in remarkably good shape following the earthquake. It was one of the few businesses in Norcia that was not destroyed.

The monks’ goal is to bottle the 5,000 litres of beer remaining in the two vats and get their new brewery going so that the sales can fund the reconstruction of the basilica and their old monastery. The original brewery, and the monks’ tourist shop associated with it, will be brought back to life at some point. But that could take years.

The Benedictine Monks of Norcia are members of the Order of St. Benedict and are located in Norsia, Italy, in the extreme southeast tip of Umbria beneath the slopes of the Sibylline mountains. The current monastery is physically located above the 5th century ruins of the house of St. Benedict and his twin sister St. Scholastica, and has been the location of monastic communities since the tenth century AD.

Today the Monks of Norcia care for the spiritual, pastoral, and temporal needs of approximately 50,000 pilgrims from around the world who annually visit the birthplace of Sts. Benedict and Scholastica.

See full article by Eric Reguly in The Globe and Mail.