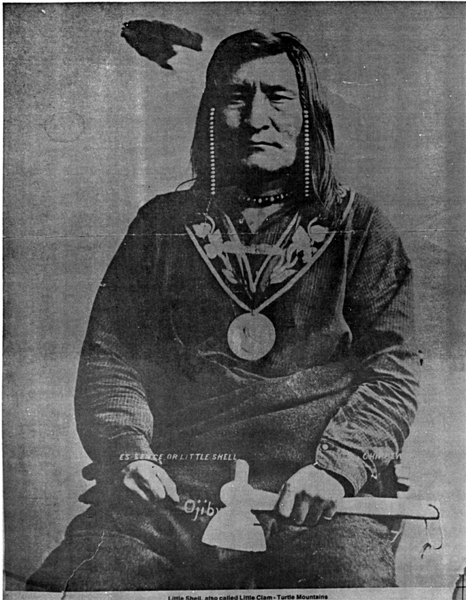 Inside an office building on Stuckey Road in Great Falls, Montana, words from long ago are being heard again, words like “Ikwe.” “Inini.” “Gaawiin.” “Omaa.”

The office is the headquarters of the Montana Little Shell Tribe and words are from the Ojibwe language, also known as Chippewa.

They’re spoken by Duncan Standing Rock Sr. and Frieda Mascarenas, two of the increasingly few Montanans who speak the language.

Standing Rock and Mascarenas are now lending their voices to a project intended to spread that knowledge to a new generation.

The Little Shell Tribe has started a program to help revitalize their ancestral languages. Since it started three years ago, it’s moved from simply collecting information about the languages to putting together lesson plans for children in Head Start programs.

The Little Shell Chippewa Tribe is without a reservation or land base and members live in various parts of Montana. There are population concentrations in Great Falls, Havre, Lewistown, Helena, Butte, Chinook, Hays, Wolf Point, Hamilton, and Billings, as well as numerous other small communities in the state.

Because the tribe has been without a land base for over 100 years, many members and their descendants live outside of Montana. Many changes are expected during the next decade as federal recognition is implemented.

The full name of the tribe is: “The Little Shell Tribe of Chippewa Indians of Montana,” and it is often shortened to “Little Shell.” The name “Métis” (pronounced may-tee) is often used, meaning “middle people” or “mixed blood.” The term Métis or more correctly Métifs, was first used during the18th and 19th centuries, but at that time it identified a specific Northwest society with its own culture and economic traditions, living in the areas of the Red River, the Saskatchewan River, Turtle Mountain, North Dakota, and the area of present day Winnipeg and Pembina, North Dakota.

The current population of enrolled tribal members in Montana is approximately 5400+. The tribe maintains an office in Great Falls, Montana and continues to fight for federal recognition. The Métis number in the thousands in the United States and south central Canada, and there are many unenrolled Little Shell people in Montana. Exact population numbers are not available.

In the mid 1800s the tribe was numbered at several thousand in the Red River-Pembina region. At that time there was no formal enrollment procedure, no reservation and thus no documented population figure. After the 1892 renegotiation of the Treaty of 1863, (the infamous “10 cent treaty”) many of the Métis, including the Band of Chippewa under Little Shell, were left without a land base or reservation, and many became nomadic.

Historic photo is of Chief Little Shell, courtesy of the Pembina Council of 1892.