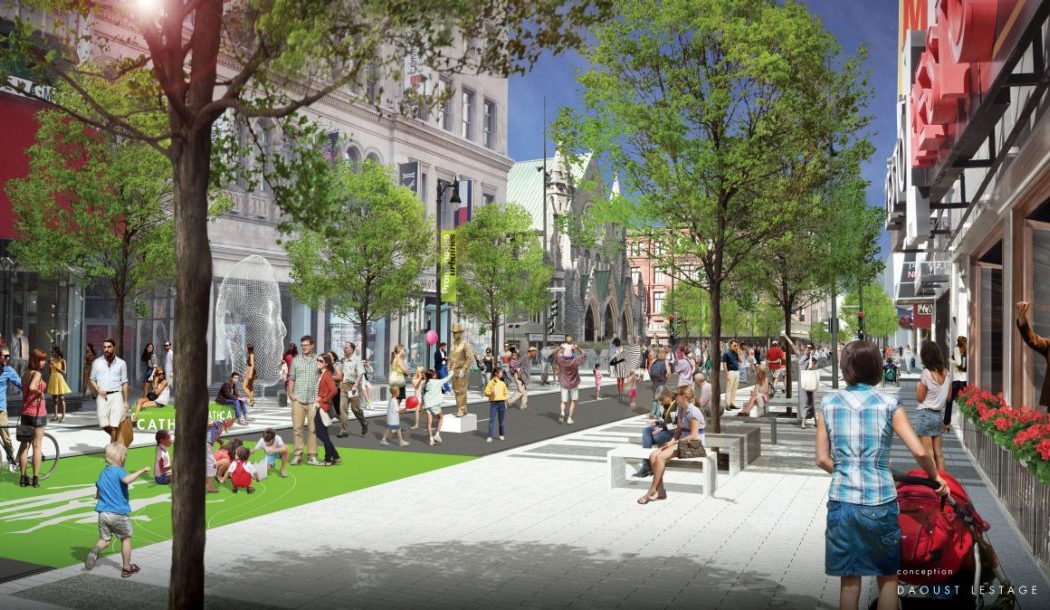 Major renovations to Ste-Catherine Street in downtown Montreal, Quebec, Canada began on January 8, 2018. Merchants are hoping they can survive a year of construction outside their storefronts.

“I’m not happy at all. I feel helpless,” said Phil Iachino, manager of Chaussures Berti, a shoe store on Ste-Catherine Street.

Ste-Catherine Street has long been at the center of Montreal’s culture, identity and, especially, its retail economy. But in recent years, the historic strip has struggled to compete with online retailers, and with car-friendly suburban malls.

The work that has just started is just the first phase of a five-year plan to give the downtown artery a facelift over a 2.2 kilometer stretch. The cost is estimated to total between $80 to $95 million (CDN). 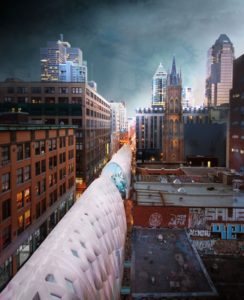 Rendering (via KANVA) of inflatable, movable tunnel envisioned for the construction on Ste-Catherine Street.

The head of the downtown commercial development association, André Poulin, is confident the project will prove beneficial in the long-term. “It will become a street of international calibre again,” he said, adding that the street had been neglected for years. This will be a rebirth.”

But how many merchants will the street lose during that rebirth? Will the street end up with diminished vitality, but efficient new infrastructure Is there any way to help ensure their survival? Is it fair for them to lose their dreams as the city achieves its public dreams. Must they sacrifice their short-term welfare for the long-term public good?

Léopold Turgeon, the head of the local chamber of commerce—Conseil québécois du commerce de détail (CQCD)—praised the city for committing to improving the storefronts and marketing the street to consumers once construction is over. But he’s hoping the city will put in place some financial compensation for merchants affected by roadwork.

A number of activities are now underway, including building visits aiming to determine sewer connection techniques, test excavations in order to locate some of the existing infrastructure and—crucially—meetings with business owners to discuss and validate “pain mitigation” measures to be implemented for the duration of the work.

Regarding, that compensation, the city says this: “Financial assistance will be granted to business owners whose businesses may be affected by this major work site. This section details the various measures implemented to support commercial activity. The subsidy program for the rehabilitation of commercial buildings proposes the following compensations:

The subsidy program for the rehabilitation of commercial buildings will be applicable to property and business owners located within the perimeter of phase 1 of the work, namely on Rue Sainte-Catherine (Rue Mansfield to Rue De Bleury) as well as on the streets bordering on Square Phillips, up to Place du Frère-André.”

But a change of this magnitude isn’t just about preserving current assets. There’s no shortage of buildings along Ste. Catherine that aren’t worth keeping, and where the property could serve a higher purpose. For instance, real estate firm BSR Group recently filed a demolition request with the city to get rid of a drab commercial building across the street from the Alexis-Nihon Mall. They want to replace it with a ten-story commercial and residential building.

And the largest shopping center in the neighborhood also needs an upgrade, which it’s getting. The Montreal Eaton Centre just received $200-million investment for a thorough renovation.

Featured rendering courtesy of the City of Montreal.

See the City of Montreal’s official page for the project.