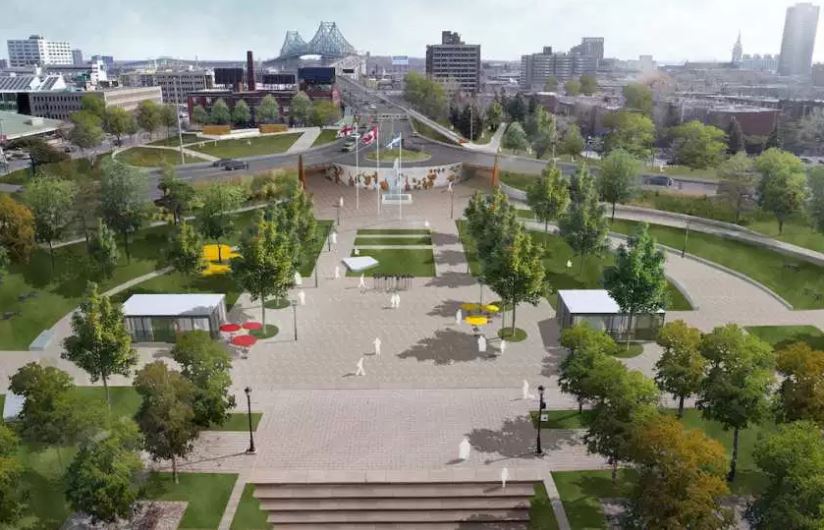 The city of Montreal, Québec, Canada is planning to revitalize the area near the entrance to the historic Jacques-Cartier Bridge by building a park, improving bike paths and making the area more pedestrian-friendly.

The $120 million development plan will reconfigure the entrance to the bridge and make it safer for people to walk or cycle near the bridge’s entrance and in neighboring communities.

The city says the work will help revitalize the neighborhoods of Sainte-Marie and Saint-Jacques. “The development will improve the appearance of this entrance to the city, help pedestrians and cyclists get around and enhance the quality of the waterfront public spaces, all while highlighting this historic structure,” said Montreal Mayor Denis Coderre.

The Jacques Cartier Bridge is a steel truss cantilever bridge crossing the Saint Lawrence River from Montreal Island to the south shore at Longueuil. The bridge crosses Île Sainte-Hélène in the centre of the river, where offramps allow access to the Parc Jean-Drapeau and La Ronde amusement park.

Originally named the Montreal Harbour Bridge, it was renamed in 1934 to commemorate the 400th anniversary of Jacques Cartier‘s first voyage up the St. Lawrence River.

The five-lane highway bridge is 3,425.6 meters (11,239 ft) in length, including the approach viaducts. There are approximately 35.8 million vehicle crossings annually, making it the third busiest bridge in Canada, the first being the Champlain Bridge, just a few kilometres upstream. The second busiest bridge in Canada overall is the Port Mann Bridge in Vancouver, British Columbia, which connects Surrey to Coquitlam.