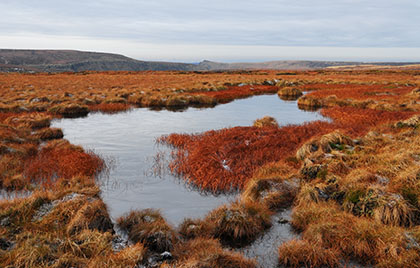 If you have visited the moorlands of the Peak District and South Pennines in northern England–or flown over them recently–you may have seen the start of a green revolution.

Since 2003, Moors for the Future has been working to reverse more than 200 years of damage that left large areas of these uplands bare of vegetation.

Individual land owners and managers in the Peak District realized that the problem of moorland erosion could not be tackled by one organisation alone and in February 2003 the Moors for the Future Partnership was formed.

Now, the plant that formed the blanket bogs of this area is being reintroduced on a scale never seen before in the UK.

Used in the World War I as a wound dressing due to its antiseptic properties, sphagnum moss will now help heal the scars on the landscape caused by erosion and pollution from the Industrial Revolution that has left bare peat exposed.

The team at the Moors for the Future Partnership is innovating new ways to reintroduce sphagnum in this often-hostile human-made environment.

Over the next four years sphagnum moss will be reintroduced to over 1700 hectares of the Peak District National Park and South Pennines with around 1.7 million plug plants and clumps of this peat-forming moss set to be planted.

The £1.25 million investment is funded from various sources including Natural England and the EU LIFE programme through the partnership’s MoorLIFE 2020 project.