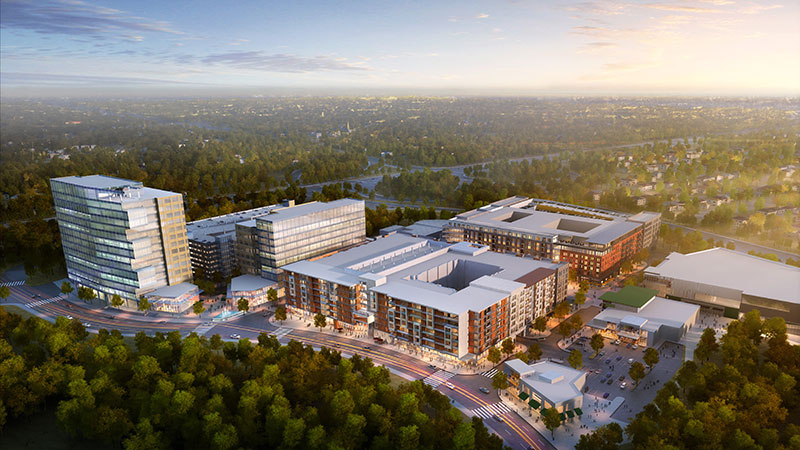 In 2016, Money Magazine named Columbia, Maryland the “Best Place to Live” in the United States. But this well-known “planned community” was never actually finished. As discussed in an earlier REVITALIZATION article, the planned downtown was never built, due to the developer’s (James Rouse) financial difficulties. That’s about to change.

On April 30, 2018, the Howard Hughes Corporation and Maryland Governor Larry Hogan celebrated breaking ground on the first urban, walkable neighborhood to be created within the Merriweather District. This multi-billion-dollar effort continues the transformation of the district, and the revitalization of the unfinished Downtown Columbia.

Environmental enhancements, such as reforestation and stream restoration, are already under way. At full build-out, the Downtown Columbia revitalization, including the Merriweather District, will include 14 million square feet of mixed-use development. 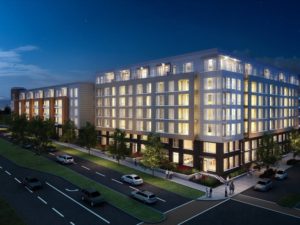 The Merriweather District’s revitalization will include 2,300 residences, a 250-room hotel, over 1.5 million square feet of office space, and 314,000 square feet of street retail with a central park.

The development of a new office building to be anchored by Tenable Inc., one of the largest and fastest-growing cybersecurity companies in the country, marks the latest milestone in Downtown Columbia’s emergence as a vibrant commercial hub for technology and innovation.

“The Merriweather District represents the future of Maryland’s tech evolution, and as the future home of Tenable’s new headquarters, it also means hundreds of new jobs right here in Columbia,” said Governor Hogan. “Congratulations once again to Tenable, to The Howard Hughes Corporation, and to everyone involved in this exciting initiative. Thank you for ensuring that when it comes to cybersecurity, Maryland will continue to lead here at home and on a global scale.”

“We are pleased to be able to build on the foundation laid by visionary developer James Rouse as we continue to reinvent Downtown Columbia’s legacy and transform it into a technology hub and vibrant destination for people to live, work, and play,” said David R. Weinreb, CEO, The Howard Hughes Corporation. “At The Howard Hughes Corporation, we are committed to building for the future. From the inaugural OPUS 1 music and technology festival we launched last year to the LEED rating and self-parking technology we are integrating into the Merriweather District, Downtown Columbia is a consummate example of our passion for innovation.”

The groundbreaking highlighted plans to include a 12-story, 350,000-square-foot signature and LEED-silver-certified office building that will serve as the new headquarters for Tenable. Tenable is scheduled to move to 6100 Merriweather Drive in late 2019, occupying approximately 150,000 square feet on the 7th-12th floors. In addition, plans were announced for a neighborhood amenity to harness the emerging technology of autonomous parking. 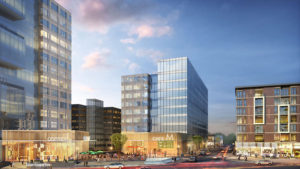 The Merriweather District buildings will be powered by STEER technology, the first fully-autonomous parking solution transforming everyday cars into driverless vehicles that self-park. This integration will transform the Merriweather District into the first city in the country to be built for automated self-parking cars. Columbia-based STEER builds products that will massively enable autonomous features in mainstream vehicles, galvanize smart transportation and stop automotive cyber threats now and in the future.

The ceremony also served to recognize the Merriweather District as the first LEED Neighborhood Development v4 in Maryland, making it the second development to achieve this certification on the East Coast, fifth in the U.S., and 10th in the world. LEED v4 is the highest level of LEED certification and is called the LEED of the future for being the highest performance-based approach that calls for measurable results throughout a building’s life cycle certification.

“These outstanding companies and ‘smart-city’ amenities exemplify our bold vision for Downtown Columbia and our community-centered approach to business,” said John DeWolf, President, Columbia, The Howard Hughes Corporation. “The Merriweather District is designed to be a dynamic live-work-play destination with access to unique offerings, great restaurants and an iconic entertainment venue within a beautiful, walkable environment.”

The new Merriweather District trophy office building will join One and Two Merriweather, a collection of Class-A mixed-use office buildings already located in the district. Tenable’s expansion reflects Downtown Columbia’s burgeoning cybersecurity industry with its proximity to the National Security Agency at Fort Meade, a built-in, highly-skilled and educated workforce, and a new amenity-rich downtown. To date, 10 percent of the redevelopment plan is under construction or complete.

The unfinished core of Columbia became the subject of an extensive five-year process that culminated with the passage by the Howard County government of the Downtown Columbia Plan in 2010, a guide to creating a vital area in which residents can live, shop, work, entertain, exercise, and enjoy cultural opportunities in an enriched natural setting.

All images courtesy of The Howard Hughes Corporation.