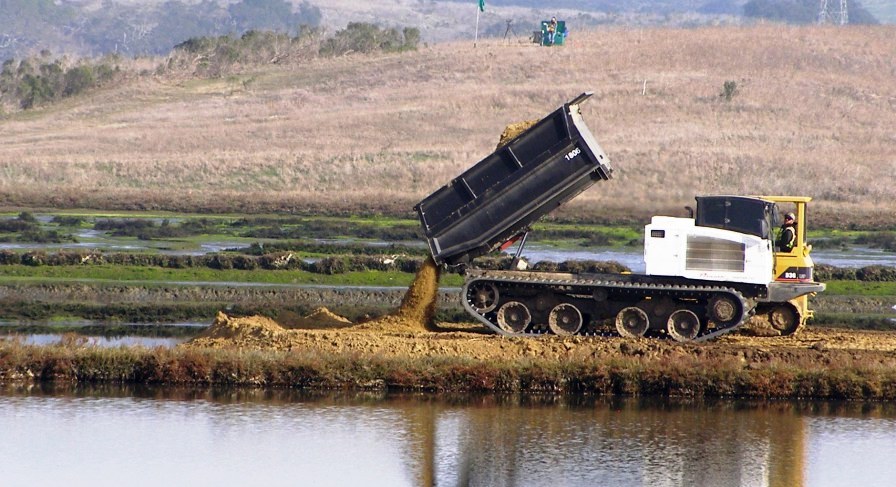 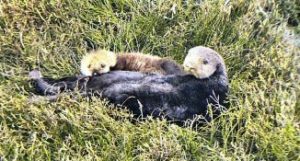 “We’re excited that we are finally able to restore some of the rarest habitat in California in an effort to shift this estuary back to a self-sustaining ecosystem,” declared ESNERR Tidal Wetland Program Director Monique Fountain.

“This is a tremendous collaborative effort. We are enthusiastic about the potential to restore critical habitats, counter the impacts of CO2 on our environment, and set the stage for continued salt marsh restoration in the Elkhorn Slough,” says Dave Feliz, California Department of Fish and Wildlife (CDFW) Senior Environmental Scientist Supervisor and Reserve Manager. 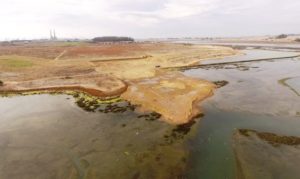 The devastated ecosystem prior to restoration.

One hundred years ago, the Elkhorn Slough area was dominated by grasslands and tidal salt marshes. By the 1930s, many adjacent marshes had been diked, drained, and “reclaimed” for farming and grazing.

Once drained, the former wetlands subsided and the soil compacted; when the dikes began to fail in the 1970s, the soil was too low in elevation to support marsh vegetation. About half of the salt marsh in Elkhorn Slough has been lost in the past century, largely due to this type of diking and draining.

Though the Elkhorn Slough now features the most extensive salt marshes in California south of San Francisco Bay, its remaining marshes are sinking and, without restoration, are projected to drown within 50 years due to sea level rise. The current project at ESNERR’s Hester Marsh will revive one of these lost marshes. Soil addition will raise the elevation to a level that allows marsh vegetation to return and keep pace with sea level rise.

“We see this as beginning an important chapter in the conservation of Elkhorn Slough with broad implications for work in estuaries throughout the nation,” says Elkhorn Slough Foundation’s Executive Director Mark Silberstein. “What we learn here will inform work at Reserves on both coasts and will provide insight to the vexing problem of reducing atmospheric carbon dioxide.”

The earth-moving phase of restoration is expected to last another six months. Then, Reserve scientists will focus on monitoring the natural revegetation of the marsh. ESNERR researchers and local students have initiated research and will be conducting extensive monitoring and experiments at the restoration site.

The Elkhorn Slough supports the highest density of Southern sea otters in California. Within the slough, habitat near Hester Marsh has been identified as an important foraging and refuge area for otters. In the last twenty years, about 50 otters have colonized healthy salt marsh adjacent to the restoration site. The Hester Marsh restoration will double the available salt marsh habitat in a part of the slough where mothers and pups spend much of their time.

In addition to the direct benefits of restored habitat, the marsh restoration project affords opportunities for groundbreaking research on the role marshes play in greenhouse gas reduction by absorbing carbon dioxide. Recent research documented high rates of carbon being stored in the marshes of the Elkhorn Slough for thousands of years. Salt marshes are particularly effective because the carbon they capture is buried indefinitely. This “blue carbon” is incorporated into soils as marshes build upward, tracking sea level rise.

“There have been many ‘back-of-the envelope’ calculations of potential benefits of marsh restoration,” says ESNERR Research Coordinator Dr. Kerstin Wasson. “But now we will find out firsthand what the real benefits are, by measuring carbon storage at the site before and after restoration. What we learn from this project will help make future coastal marsh recovery activities across the state more successful and sustainable.” This is particularly important to moderate changing climate.

Led by ESNERR’s Tidal Wetland Program, the project has been developed with input from more than 100 scientific advisors, environmental regulators, and community members.

The CDFW manages the 1,700-acre Reserve that includes five miles of public trails winding through a variety of rare habitats. In partnership with NOAA and the Elkhorn Slough Foundation, the Reserve conducts active education, research, stewardship, and volunteer programs. An active volunteer corps of nearly 100 community members supports the work of the Reserve.