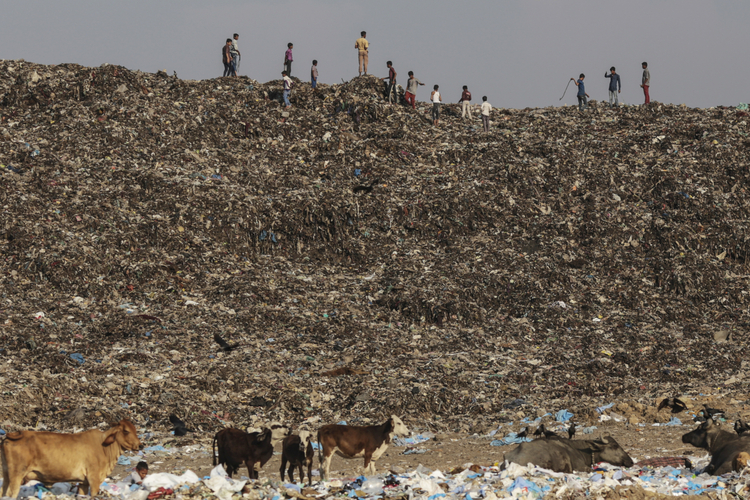 The land-starved peninsula currently discards 11,000 metric tons of refuse every day in three dump yards that together occupy more than 740 acres.

At going market rates, that land would be worth as much as $4.4 billion if it were sold and used for housing.

Meanwhile, 6.5 million people, or half of Mumbai’s population, live in slums without basic sanitation and safe drinking water.

Mumbai’s landfills underscore the need to put scarce resources to optimal use if Prime Minister Narendra Modi is going to succeed in his goal of building everyone a home by 2022.

He aims to create 100 smart cities while tidying up the country under his Swachh Bharat Abhiyaan, which translates as Clean India Mission.

Yet the land, if redeveloped, must price in a steep discount, as it would take years of cleanup and land preparation before anything could be built on it, said Jones Lang LaSalle India’s national director of research, Ashutosh Limaye.

Rustomjee Group, a real estate developer with more than 10 million square feet of completed projects across Mumbai, skipped opportunities in Mulund and Deonar, despite the areas’ connectivity to the downtown area by rail and highway.

Redeveloping dump yards wouldn’t just free up space to build homes, it would mean more roads, parks or hospitals in a city with already-burdened infrastructure.

The real challenge in redeveloping dump yards, according to CBRE’s Magazine, is the “huge upfront capital” needed to clean the land, make it safe for habitation and then build sewage, water and electricity lines.

The government could start by offering it to developers at low rates, he said.