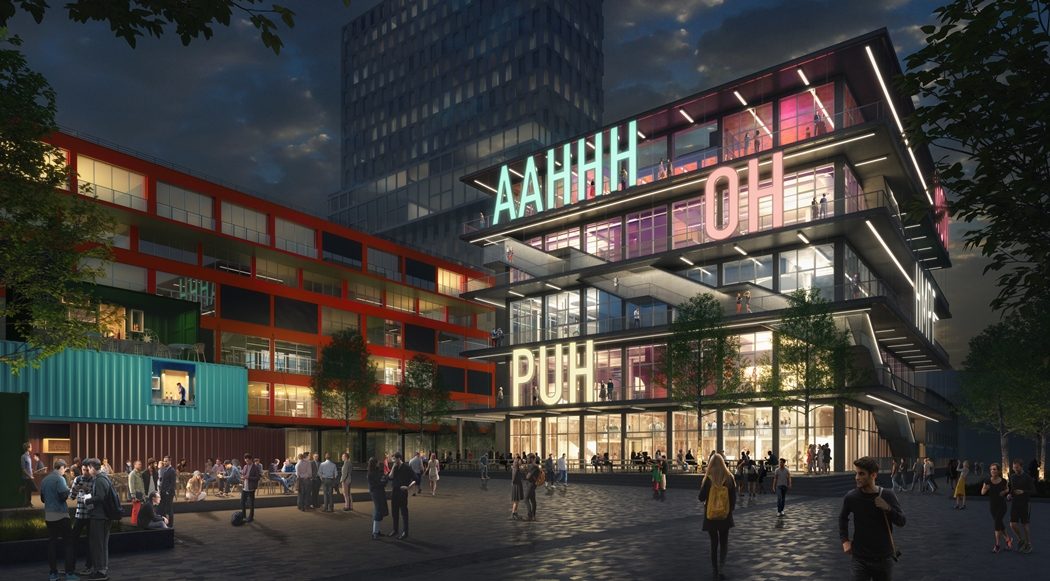 Amsterdam-based architectural and planning firm MVRDV has introduced a radical approach to redeveloping and revitalizing a former industrial site close to the historic city center of Munich, Germany. 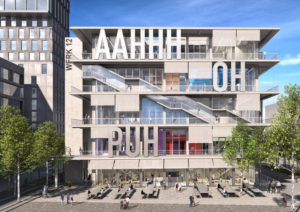 The WERK12 project is a transparent, transit-oriented 9600 square meter mixed-used redevelopment located close to Munich’s East Station. The project was commissioned by OTEC GmbH & Co. KG. It’s goal is to reconnect past to present via a new innovative and expressive building for sports, work, gastronomy, and entertainment emerges from a former manufacturing site.

The new building draws inspiration from its industrial heritage, a former Pfanni food factory and it’s hoped that it will become part of a lively and dynamic new urban district. Commissioned by OTEC GmbH & Co. KG as part of a 40-hectare urban regeneration masterplan to create around 1,200 new homes and up to 7,000 new jobs, the building will offer loft-style offices, restaurants, a skyline swimming pool, sports facilities and day to night time entertainment.

“WERK12 is totally unique and entirely new for Munich and is a strong contrast to the historic centre just ten minutes away”, says Jacob van Rijs, MVRDV co-founder. “It is a flexible and completely user-adaptable building with spaces that can transform over time with bold and expressive texts on the façade are visible from a distance. This transparent building becomes a new focal point on the new Plaza that will form the heart of the Werksviertel.”

An expressive lettered glass façade by artists Engelmann and Engl allows a dialogue with its surroundings. The new Concert Hall Munich will be located in Werksviertel Mitte in the coming years. 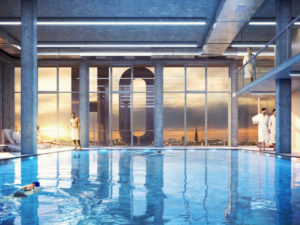 Responding to the diverse industrial history of the current site of WERK12, the challenge was to create an adaptable building that becomes a nucleus for the new emerging Werksviertel neighborhood located in close proximity to the city’s Ostbahnhof (Munich East railway station).

MVRDV’s ambition is to implement a focal point to the area, with a new building that opens in all directions and is at the heart of the Knödelplatz square. The facade of the building is transparent and does not separate inside from outside and instead of isolating its inner activities, it is in constant dialogue with its surroundings. A transparent reincarnation of industrial times celebrating the future.

The Werksviertel is largely built on an old factory site with a rather informal character. The design translates this character into the new building. Projects often lose their old qualities when they are redesigned and the most important factor was a design that enhanced maximum sunlight, ventilation, and adaptable spaces. The ceiling heights are more than 5 meters on all floors, a rarity for contemporary buildings. Following the idea of maximum dialogue, the circulation snakes its way around the building, leading from the main square up to the top floor creating a public route to the sky. The panoramic stairs are linked to 3.25 meters wide terraces surrounding each floor, blurring the borders between inside and outside and generating shading and circulation at the same time.

The site is a unique an in an entirely new part of Munich and although it is very close to the city centre, it shows a strong contrast to the historic atmosphere. The 5-meter-high letters across the façade of WERK12 reflecting this aspect of the site; a past full of contrasts. They are a tribute to the graffiti culture and extensive use of signage found on the old site. 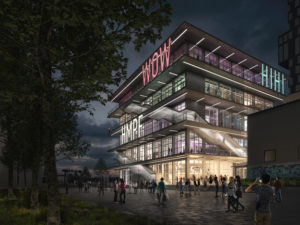 Designed as an upscale urban art piece by local artists Engelmann and Engl these letters are public signage allowing the building to display emotions. Using the tool of German-language comic words, contemporary yet historical at the same time, these words are universal and found in various youth and subculture groups especially on Internet and SMS speak. The words are fractional and work with the repetition of letters. In this way, they create emotions that are not only visually perceptive but extended as an acoustic component.

The ultimate contrast emerges when the building illuminates at night flipping the industrial simple geometry into a light show of another scale – the new selfie hotspot of Munich. The building exposes its inner life.

The transformed site confronts the new building with foreseeable changes in the future and demands flexibility and adaptability of the structure. The double heightened floors and the external circulation provide a striking outline, whilst a slim concrete rack serves as a landscape of gallery architecture in the interior of WERK12 and is distributed for individual and sustainable use.

The building is created for multi-functional functions and uses and will open in February 2019 with a high-end health club, several bars, restaurants for nightlife and gastronomy, as well as office spaces demonstrating the full potential of the design.