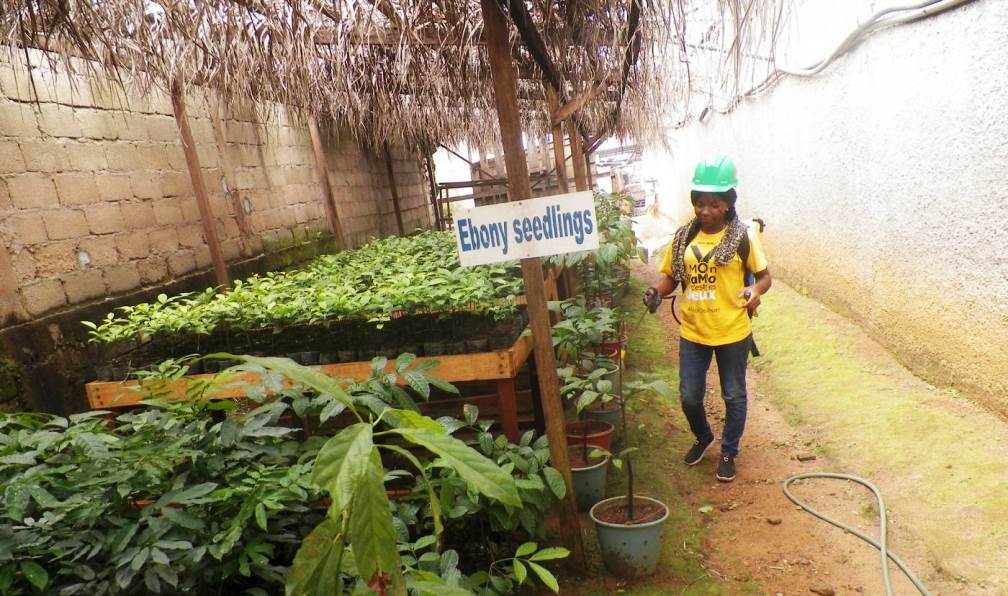 Companies that use wood grown in Cameroon—from makers of guitars to electricity poles—are helping revitalize endangered tree species to better sustain their businesses and bolster the fight against climate change.

The firms have teamed up with the government and villagers in public-private partnerships to restore forests because it makes sense for both their profits and the planet, they said.

Barbara Wight, chief financial officer for Yaounde-based Crelicam, an internationally owned supplier of Cameroonian ebony for musical instruments, said forests were crucial for the future of all who depend on their wood and other natural assets.

“Working with the government and the local communities to protect these resources is important,” she said in an interview in Yaounde.

Two decades ago, Cameroon’s East and South regions were covered in verdant hardwood trees such as ebony, sapele and African cherry, but that is no longer the case, said Martin Tchamba, head of the forestry department at Cameroon’s University of Dschang.

High demand for wooden electricity poles, medicinal trees, furniture, specialist guitars and other equipment has depleted most of these hardwoods to the point that they have become endangered, he said.

“There is an urgent need to depart from the unsustainable practice of felling trees without replacing them,” said Tchamba. “Tree restoration could help drive sustainable forest management.” Involving companies in such efforts could herald a transformation in the economic model of exploiting natural resources without taking care of the environment, he added.

Crelicam, which is co-owned by two foreign companies—U.S.-based Taylor Guitars and Spain-based Madinter, which supplies wood for instruments—is one of the firms blazing a trail in safeguarding the ebony tree.

The ebony project, which began in 2016, is part of Cameroon’s sustainable forestry initiative, one of the biggest such projects in the forest-rich Congo Basin, home to the world’s second-largest tropical rainforest.

Other companies replanting hardwood trees in Cameroon include Plantecam, a pharmaceutical company that uses African cherry to make medicines for prostate cancer.

The National Forestry Development Agency (ANAFOR), a government-owned organization that processes timber for use in Cameroon and for export, is also working with local councils and private sector as part of the country’s sustainable forestry initiative, which began in 2012. 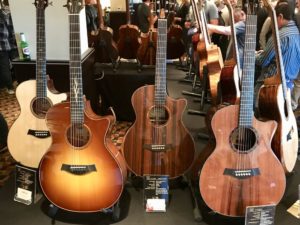 Taylor Guitars funds and works with the state and the Congo Basin Institute on the ebony restoration project which is also part of a U.N-backed programme to reduce planet-warming emissions from deforestation in Cameroon’s south.

The longer-term aim is to secure a supply of the wood for the next 1,000 years or even longer, she added. So far in 2019, the company has planted 3,000 ebony trees in four villages buffering the Dja Rainforest Reserve southeast of Yaounde.

The project, estimated to cost more than $1 million, aims to plant about 20,000 ebony trees by 2021. It also includes research on how to grow the hardwood, as well as cultivating it in nurseries, cloning and grafting.

Another company working on tree species restoration is SITEP-CAM, an industrial firm based in Cameroon’s Northwest Region which processes and markets electricity poles from eucalyptus trees. (NOTE from Storm: Eucalyptus is not native to Africa, and tends to be an environmental disaster when planted outside its native Australia.)

SITEP-CAM CEO Clement Wara said it had provided a steady market for farmers growing eucalyptus since 2012 and given them nursery-grown seedlings to plant. “We ensure that every eucalyptus tree cut and used for electricity poles is replaced,” he said.

In 2018, about 1,500 eucalyptus trees were also planted with Bali and Kumbo councils. But due to concern over the amount of water the thirsty trees soak up, some local authorities have been reluctant to join the programme, Wara noted.

“BRING BACK OUR TREES”

Tchamba said any effort to restore trees in a deforested landscape, “no matter how small”, would help capture rain, conserve the soil, preserve biodiversity and reduce the effects of climate change by storing more carbon.

Some companies are also combining the planting of hardwood trees with local fruit and cocoa trees to encourage forest communities to participate, he noted.

Local people who have embraced the programs told the Thomson Reuters Foundation they were upbeat about the results. “We need to bring back our trees,” said Engono Manguel Paul, a farmer in Djoum. “This is our life; this is the future of our children.”

The cocoa and fruit tree seedlings, alongside fertilisers and pesticides received free from the companies, have allowed them to increase their yields and incomes, he added.

But Crelicam officials said getting the ebony restoration project off the ground had not been easy. The company first had to learn how to grow ebony, which cannot be planted in rows using normal plantation methods but is more complex.

“Going through the authorisation process from the government, as well as convincing the local communities to be part of the process was also a big challenge,” said Wight.

As ebony takes 60 to 70 years to mature, the villagers had little interest in a project that did not yield immediate financial benefits, she added. “We had to introduce the cultivation of cocoa and fruit trees, inter-cropped with ebony, to permit them to generate income in a shorter period,” she said.

Cameroon’s environment minister, Pierre Hele, said the government would make it a policy to involve companies and forest communities in hardwood replanting programs.

Researcher Tchamba urged more companies to team up with governments to protect at-risk tree species. “We need more businesses to embrace this type of restoration initiative that enforces the principle of sustainability,” he said. 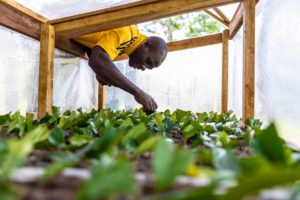 On April 17, 2019 Taylor Guitars, one of the world’s leading manufacturers of acoustic guitars, announced the successful planting of 1,500 West African ebony trees in Cameroon’s Congo Basin region in an effort to help preserve the future of the species.

The planting, part of Taylor’s initiative called The Ebony Project, is the largest known planting of West African ebony — the impact of which Taylor hopes will be felt for generations. The project also planted an additional 1,500 fruit trees. The planting is part of a larger effort to plant 15,000 ebony trees by the end of 2020.

Ebony has long been one of the most relied-upon tonewoods among makers of stringed musical instruments. In Western Africa agricultural land conversion, the bushmeat trade, and logging have significantly reduced ebony populations. The International Union for the Conservation of Nature (IUCN) classifies the species as “Vulnerable.”

As a company that relies on West African ebony and other tonewoods from around the world to craft its guitars, Taylor recognizes its responsibility to be an ethical steward of these natural resources. In 2011, Taylor Guitars and Spanish tonewood supplier Madinter International partnered to become the co-owners of Crelicam, an ebony sawmill in Yaoundé, Cameroon, with the goal of creating an ethical, socially responsible value chain for ebony musical instrument components. In 2016 Taylor partnered with the Congo Basin Institute to learn more about ebony ecology.

The collaboration took form as The Ebony Project and has since produced groundbreaking research, providing the most accurate estimates of the size and scope of ebony’s native range, as well as capturing the first-ever images of insects that pollinate the ebony flower and mammals that distribute the ebony seed. The Ebony Project also led to the development of an innovative community-based agroforestry program, which includes the planting of a number of locally used fruit and medicinal trees along with ebony. The project is fully funded by Bob Taylor, co-founder and president of Taylor Guitars.

“I’ve dedicated most of my life to building the best guitars I can make,” Taylor said. “Taylor is known for its high standards of quality and performance, but now I want to make sure we’re also creating a better future for ebony and leaving more than enough resources for generations of instrument builders long after I’m gone. That’s why this planting is so meaningful.”

The scope of Taylor’s innovative work in Cameroon has attracted significant attention: The U.S. State Department recognized Taylor with its prestigious Award for Corporate Excellence (ACE), while interest from leading international institutions such as the World Bank resulted in the signing of a Public-Private-Partnership agreement between Taylor Guitars and Cameroon’s Ministry of Environment. The agreement is exploring the feasibility of scaling up the Ebony Project across Southern Cameroon.

Over the course of several weeks this month, members of five different Cameroonian communities collectively planted 1,500 ebony trees and 1,500 fruit trees with assistance from members of the Congo Basin Institute and Taylor Guitars. There was a sense of enthusiasm and accomplishment as teams of villagers of all ages pitched in to help carry the young ebony seedlings into the dense rainforest where they were strategically planted to give them their best chance for growth and survival.

This article—not including the Taylor press release—by Elias Ntungwe Ngalame (edited by Megan Rowling) originally appeared on the website of the Thomson Reuters Foundation, the charitable arm of Thomson Reuters. Reprinted here (with minor edits) by permission.