On February 4, 2019, the Naples Bay Restoration and Water Quality Improvements at the Cove Project in Naples, Florida received the Envision® Silver award from the Institute for Sustainable Infrastructure.

To reach Silver status, a project must demonstrate that it delivers a heightened range of environmental, social, and economic benefits to the host and affected communities.

“Our team is proud to support the City of Naples in its mission of environmental stewardship and resiliency,” said Kelly Smith, PE, Senior Principal and Project Manager with Stantec, the prime consultant for project design and engineering.

“What began as a predominantly engineering issue dealing with sediment and it’s environmental impact, grew into an impactful opportunity to provide a more comprehensive water quality enhancement for Naples Bay that also provides an interactive and aesthetically improved experience for Naples residents and guests,” he continued.

“This is a project that the City Stormwater Division staff believes the City of Naples and general public can really be proud of,” added Andrew Holland, Naples City Project Manager. “The project goals of restoring and enhancing the ecosystem and habitat, protecting the environment and connecting the public with Naples Bay serve to deliver lasting, meaningful benefits to our community.” 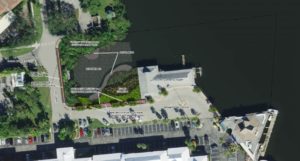 Naples Bay and its contributing watershed have been dramatically altered by development over time. Associated with various water management projects, the watershed of Naples Bay has expanded from approximately 10 square miles in size to its current 160 square miles.

Enhancing water quality for its residents, visitors, and neighbors is an important part of the City’s environmental stewardship. To this end, the City identified the need to investigate the ecological and environmental conditions at the Cove Pump Station outfall.

Stakeholder involvement in the project was identified at the outset as a chief priority, with the project team holding a public information meeting to solicit feedback from potentially affected residents and environmental organizations such as The Conservancy of Southwest Florida.

The project supports the 20-Year Naples Bay Restoration Plan by incorporating water quality improvements with natural wetland restoration in the form of a “living shoreline” concept.

The City of Naples worked in close collaboration with Stantec to deliver this award-winning environmental restoration and infrastructure renewal project.

The Envision system examines the impact of sustainable infrastructure projects as a whole, through five distinct categories: Quality of Life, Leadership, Resource Allocation, Natural World, and Climate and Resilience. These key areas contribute to the positive social, economic, and environmental impacts on a community.

“During a time when Florida waterways are clearly showing signs of stress, the City of Naples has again demonstrated its commitment to managing its stormwater in the most responsible way while boosting environmental restoration. The expertise of Stantec, the ongoing participation of the local community, and the dedication of the Naples City Council has made this project one in which the entire State can be proud of,” said Gregg Strakaluse, Director for the City of Naples Streets and Stormwater Department.

The award criterion contributing the most to the Naples Bay Restoration and Water Quality Improvements at the Cove earning Envision Silver was “Restoring habitat and preserving species biodiversity.”

There are three key components associated with this project, each of which will dramatically improve existing conditions at the site which are currently not conducive to supporting a range of endemic species:

The project team selected a relatively new approach to restoring oyster habitat, improving water quality, and protecting the shoreline from threats and vulnerabilities by incorporating the living shoreline component in the project’s design.

Living shorelines are also able to improve water quality through increased nutrient uptake, restore and create new estuarine habitat, create new connections between existing and new habitats, and yield economic benefits to the community. In the case of the Naples Bay Restoration and Water Quality Improvements at the Cove Project, annual economic benefits associated with the addition of oyster and mangrove habitats are estimated to be $41,700.

“The Naples Bay Restoration and Water Quality Improvements at the Cove Project is an elegant design using natural solutions to achieve the community’s goals of improving water quality, estuarine habitat, and overall community quality of life,” said ISI President and CEO, John Stanton. “Hopefully the success of this project will spur other coastal communities to implement living shorelines. ISI is pleased to present this project with an Envision Silver award for sustainable infrastructure.”