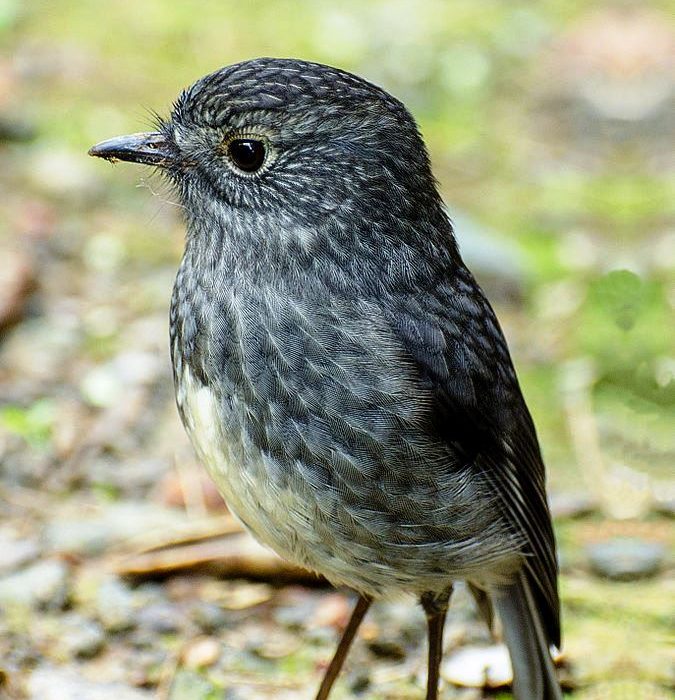 The North Island robin, also known as toutouwai, is a friendly and trusting bird and is found in both native and exotic forests. It often comes within a couple of metres to people, and they occasionally stand on a person’s boot.

The robins have not been seen in Egmont National Park since 1905 and are being reintroduced as part of the $24 million environmental project Taranaki Mounga.

Dr. Kevin Parker, a leader of this translocation effort, said he was impressed with the condition of the forest on Mt Taranaki, and the amount of birdlife he could hear. He was confident the toutouwai would settle and thrive.

“They are the first of what will be many translocations here and from an ecological science point of view you can say it’s about ecological restoration but at a more spiritual level it’s about returning the mauri right? Returning the life force of this forest,” he says.

The North Island robin (Petroica longipes) is a species of Australasian robin endemic to the North Island of New Zealand. It and the South Island robin of South and Stewart Islands were once considered conspecific (and called the New Zealand robin), but mitochondrial DNA sequences have shown that the two lineages split prior to the Pleistocene and supported the split into two species.

The North Island robin is distributed mostly in the centre of North Island, with small relict populations in the north and south in Moturua Island in the Bay of Islands, Little Barrier Island, and Kapiti Island.

Populations have also been reestablished in Karori Wildlife Sanctuary and Moehau in the Coromandel Peninsula. A remnant population is currently reestablishing itself in the Ohope Scenic Reserve in the Bay of Plenty.

40 birds have also been translocated from Mokoia Island, Lake Rotorua, to the Ohope Scenic Reserve to assist in the restoration and recovery of the species. Their natural habitat is mostly natural forest, particularly Podocarpus and Nothofagus forests, from sea level up to the tree line.

North Island robins measure 18 cm from beak tip to tail tip, and weigh about 35 grams, and so are slightly larger than a house sparrow. They have long, thin legs and an upright stance.