On April 16, 2019, the City of Detroit and Bedrock celebrated the completion of an innovative affordable housing option designed for residents who are 55 years and older in Detroit’s historic Brush Park neighborhood, just minutes from downtown.

“Brush Park and City Modern is quickly becoming one of the city’s hottest neighborhoods with new construction and redevelopment lined up for years to come,” said Mayor Mike Duggan.

“And here we have an entire new 54-unit building reserved for low-income seniors who will be able to live affordably right in the heart of this incredible revitalization,” he added.

A part of Bedrock’s 8.4-acre City Modern development, “The Flats at 124 Alfred” is the first of six total apartment buildings to be completed. It turns one of the city’s wealth of vacant lots into a new wealth of affordable housing.

The near-downtown location means that it will also help accelerate the revitalization that’s been happening so dramatically there, since affordable housing is a key component of most successful city center revitalization strategies.

“When we broke ground on City Modern in November of 2016 on the very spot that is accepting residents today, we had an inclusive vision for this community,” said Bill Emerson, Bedrock CEO. “We prioritized completing The Flats at 124 Alfred first because we know there is a huge demand in Detroit for affordable housing options, and today we celebrate a milestone in our commitment to building and preserving hundreds of affordable units in the coming years.” 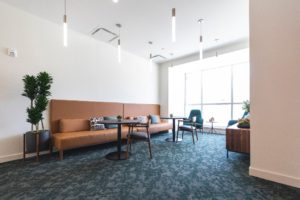 The Flats at 124 Alfred contain 54 apartments for-lease offering breathtaking balcony views of Detroit, light-filled interior spaces and open floor plans. One-bedroom units range from 600-735 square feet and include floor-to-ceiling windows, walk-in closets and energy efficient, stainless steel appliances. The complex is equipped with a fitness center, residential lounge with a large outdoor terrace, outdoor garden spaces, bike share, gated underground parking and high-speed internet. These units are open to residents that are 55 years and older who earn 30-60 percent of the Area Median Income (from $14,910 to $29,820 for a single person).

The all-new building was designed by Detroit-based Hamilton Anderson Associates using Detroit’s industrial heritage as inspiration. The Flats at 124 Alfred add to the diverse mix of architecture, community and lifestyle choices at City Modern.

“All of us at HAA are pleased to have been part of this historic project for the City of Detroit,” said Hamilton Anderson Associates Principal Rainy Hamilton. “Our mission mirrors that of Bedrock and our city leaders – we are rebuilding Detroit, one home, one block and one neighborhood at a time – an inclusive community for all to enjoy.”

In 2017, Bedrock made a commitment to the City of Detroit that 20 percent of its residential portfolio would be dedicated to affordable housing units. When complete, more than 20 percent of the total 285 for-lease units in City Modern will be designated affordable.

Over the next several years, Bedrock plans to develop or rehabilitate a total of up to 3,500 residential rental units. This means 700 units of affordable housing will be added and preserved within Detroit’s market.

In addition to building brand-new units, this commitment also represents preservation and renovation of existing affordable housing in order to help keep long-time residents in their homes and ensure that future residents will have access to affordable housing options in the greater downtown area. 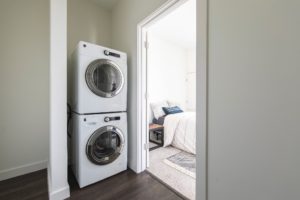 City Modern is a groundbreaking, community development that combines historic properties with modern design. This expansive, mixed-use development helps to restore the innovation, style and diversity that is inherent to the historic Brush Park district. As one of the largest and most central residential neighborhoods adjacent to downtown Detroit, Brush Park is perfectly situated to serve as a link between downtown and midtown, creating an ideal location for all types of residents.

In 2016, the City of Detroit was designated a UNESCO “City of Design,” becoming the first American city to receive this honor. City Modern seeks to embody that designation, creating a place that illustrates how the design process can thoughtfully and beautifully resolve longstanding urban issues. To that end, the mixed-use, mixed-income development vision will include elements such as a connective string of pedestrian parks, alleys designed as sustainable infrastructure, green roofs and shared transportation systems.

The development encompasses four existing Victorian mansions with 20 new buildings in the City Modern masterplan. When combined, these 24 buildings will result in five different building typologies – Townhomes, Carriage Homes, The Duplettes, Historic Homes, and the Flats- and create a total of 410 contemporary residential units, 285 which will be for-lease. This deliberate blend of historic and modern architecture celebrates the past, while looking toward the future to create a 21st century narrative for Brush Park and Detroit.

Bedrock is a full-service real estate firm specializing in acquiring, developing, leasing, financing, and managing commercial and residential buildings. Since its founding in 2011, Bedrock and its affiliates have invested and committed more than $5.6 billion to acquiring and developing more than 100 properties, including new construction of ground up developments in downtown Detroit and Cleveland totaling more than 18 million square feet.

Bedrock is currently developing four downtown Detroit transformational projects. In late 2017, Bedrock broke ground on the site of the historic JL Hudson’s Department store. In late 2018, the Monroe Blocks development broke ground. The renovation of the classic Book Tower is well underway and the One Campus Martius addition is expected to be completed by 2020. Together, these projects will bring close to 2 million square feet of office, retail, event and residential space to the market.

The world’s first Shinola Hotel, a partnership between Bedrock and the Detroit-based watch and leather goods manufacturer Shinola, opened on Woodward Avenue in 2019, establishing a hospitality experience original to Detroit. Home to local small businesses and a dining portfolio by award-winning chef Andrew Carmellini, Shinola Hotel was designed to be Detroit’s new living room. 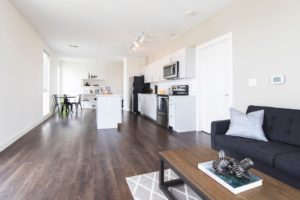 Bedrock and its affiliates have invested in significant public art installations in Detroit such as The Belt alley, which represents dozens of international and local artists; The Z Deck, which transformed a parking garage into a gallery experience with nearly 30 original murals; a public sculpture by KAWS; the largest mural of Charles McGee’s career, one of Detroit’s most celebrated artists; Mirage, an interactive installation by renowned artist Doug Aitken in the former State Savings Bank Building; a two-story painting by Kelsey Brooks, an artist known for visual representations of scientific formulas; along with dozens of other art-centric collaborations.

Placemaking initiatives are also priorities of Bedrock’s larger real estate strategy. The biannual Downtown Detroit Markets program allows dozens of local entrepreneurs to test market their retail concepts each year, while partnerships with local, national and international artists have helped put Detroit on the map as a can’t-miss cultural destination.

Additional placemaking initiatives include a seasonal beach in Campus Martius Park; an ice-skating rink every winter; “The Beach Detroit” ball pit by Snarkitecture; “Rainbow City Roller Rink” by Friends With You; public basketball courts and other activities in Cadillac Square each summer; and countless other activations.

All images of The Flats at 124 Alfred courtesy of Bedrock Detroit.