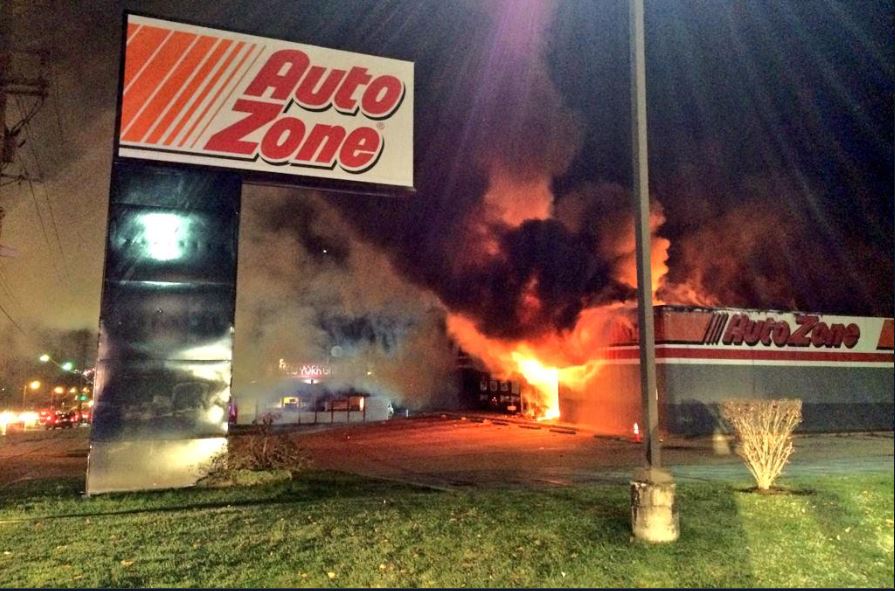 The Council of Development Finance Agencies (CDFA) was recently asked to make recommendations for revitalizing the site of the buildings destroyed during the Ferguson, Missouri civil unrest. The former AutoZone site is actually located in the City of Dellwood along the West Florissant Avenue Corridor. One of their suggestions for the now-vacant property? Senior housing.

West Florissant Avenue is a highly used connector road that runs through the cities of Jennings, Dellwood and Ferguson in St. Louis County. It is lined with a mix of small businesses, large stores, single-family and apartment buildings, large community destinations such as parks, churches and health clinics. 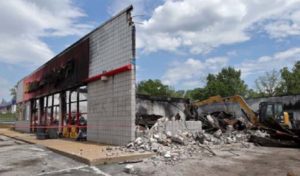 After the fire. Photo by unknown.

West Florissant Avenue became known worldwide as “Ground Zero” for the Ferguson movement, after the police-shooting death of Michael Brown Jr. in August 2014. The former AutoZone is one of eight buildings that were burned down during the period of civil unrest in Dellwood and Ferguson.

Today, businesses along the corridor still struggle with the economic effects of property damage, negative media attention, and reduced visitors. Plans to revitalize the Corridor were in motion prior to the period of civil unrest. The St. Louis Great Streets Initiative was already looking into revamping West Florissant’s commercial area.

The goal of the St. Louis Great Streets Initiative is to trigger economic and social benefits by centering communities around interesting, lively and attractive streets that serve all modes of transportation.1 Since the civil unrest in 2014, the St. Louis Economic Development Partnership has been the driver of progress along the corridor.

EPA’s Brownfields and Land Revitalization Team joined the redevelopment planning efforts and assisted with community engagement and design planning that coordinated with the Great Streets Initiative plans. Over the course of several public meetings, the community identified apartments, senior housing, “sit down” restaurants, greenspace, a health clinic, and a fresh grocery market as desired amenities throughout the Corridor. 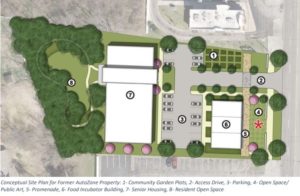 Since the design recommendations were created, the AutoZone property has been acquired by the owner of the adjacent New York Grill property. A local businessman, the new land owner is receptive to the concepts proposed in the design recommendations, particularly the senior housing component. He indicated a willingness to combine the two adjacent parcels (AutoZone and New York Grill) into a larger 2-acre site to accommodate a scaled-up version of the design concepts. This report will provide financing suggestions related to the proposed concepts and demonstrate development and investment and options for the senior housing component.

East-West Gateway launched the St. Louis Great Streets Initiative in early 2006 to expand the way communities think of their streets. Rather than viewing a roadway project as solely a way to move more cars and trucks faster, the goal of the St. Louis Great Streets Initiative is to trigger economic and social benefits by centering communities around interesting, lively and attractive streets that serve all modes of transportation.

The First Phase culminated in October 2006 with the Great Streets Symposium. More than 160 planners, engineers, city managers and elected officials attended the event, during which local and national experts discussed the many benefits of great streets. Great Streets not only help make attractive, interesting places but they support local economic development goals and improve quality-of-life by providing transportation choices for the entire population.

The Second Phase of the project is the development of this web-based Digital Guide, which provides planning, design and process-related recommendations for making “Great Streets” happen. In February 2007, a technical workshop was held to introduce the St. Louis Great Streets Digital Guide and to assist local communities in designing their own “Great Streets.” Following the workshop, this web manual became publicly accessible as a regularly maintained website.

In the Third Phase of the project, four communities received assistance from a national consultant team to develop concept plans for turning good streets into Great Streets. In the Fourth Phase, consultants helped three communities develop construction design documents, and assisting the five cities on Manchester Road in West County with development of a corridor plan.

Featured photo is by Chris Nelson (@1ChrisNelson) via Twitter.