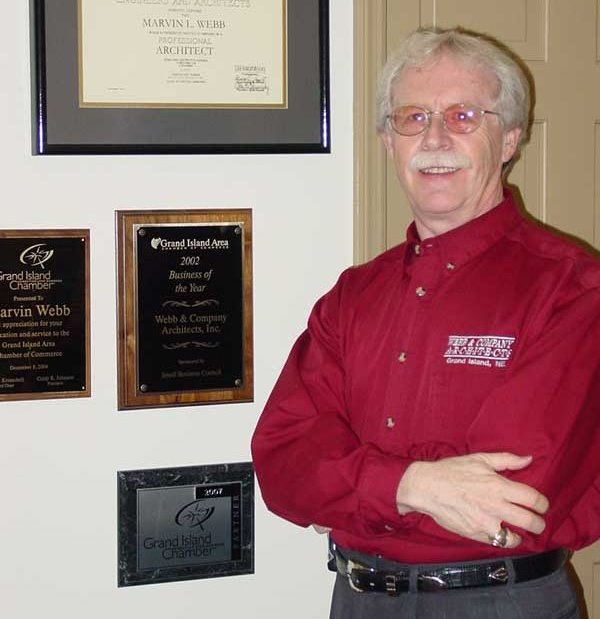 Grand Island is the county seat of Hall County, Nebraska. It was founded in 1857, and has a population of about 49,000 folks.

On June 3, 1980, Grand Island was hit by a massive supercell storm. Through the course of the evening, the city was ravaged by seven tornadoes, the worst of which was rated F4 on the Fujita Scale. The hardest hit area of town was the South Locust business district. There were five deaths as a result of the tornadoes.

Storms and the simple passage of time have taken their toll on the city’s historic buildings. As a result, so many have been restored in recent decades. One architects in particular had been involved in a large number of these restorations: Marvin Webb.

Webb received his Bachelor of Architecture Degree from the University of Nebraska-Lincoln College of Architecture in 1971. As a registered professional architect, he has been a member of the American Institute of Architects since graduating in 1971. Webb has had 36 years of experience working with a variety of architectural firms in Omaha, Lincoln, and the last 26 years in Grand Island.

Webb said his first historic restoration project, the Burlington Northern Railroad Depot, is his favorite project and the one he is most proud of. Work began on Burlington Station (formerly called Plum Street Station) in 1998 and the building was dedicated in 2002.

“It involved working with a non-profit owner — the Hall County Historical Society — and helping them go through the grant application project and tight budget to get the work done correctly,” he said.

Regional Planning Director Chad Nabity said Webb has had a “lot of vision and impact” on downtown Grand Island and the community overall due to his CRA facade and historic renovation projects.