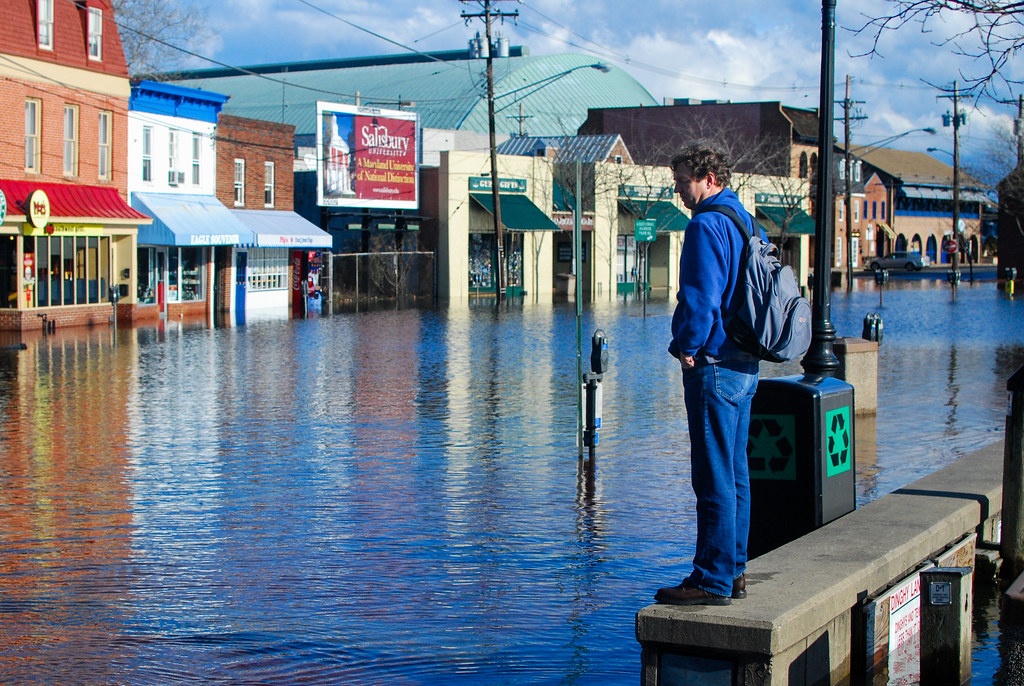 In July of 2020, the National Oceanic and Atmospheric Administration (NOAA) issues an alarming new report confirming what intelligent people already knew: that climate change is creating more-frequent and more-severe coastal flooding, and it is going to continue getting worse.

Publishing this report was a brave thing to do, given that the Trump administration has banned any acknowledgment of climate change by government agencies, and will likely cut their funding or replace their leadership as a result.

Here’s the Executive Summary of the report:

Sea level rise flooding of U.S. coastlines is happening now, and it is becoming more frequent each year. This flooding typically occurs when ocean waters reach 0.5 meter (m) to 0.65 m above the daily average high tide and starts spilling onto streets or bubbling up from storm drains. Evidence of a rapid increase in sea level rise related flooding started to emerge about two decades ago, and it is now very clear.

This type of coastal flooding will continue to grow in extent, frequency, and depth as sea levels continue to rise over the coming years and decades.

Observations from NOAA’s national tide gauge network calibrated to the national set of coastal flood thresholds used by local emergency managers are tracking this phenomenon. NOAA’s National Ocean Service calls such flooding high tide flooding (HTF), and its cumulative toll is damaging to subsurface and ground-level infrastructure and is disrupting lives and livelihoods.

As the frequency of HTF increases, NOAA’s National Weather Service is issuing record numbers of watches/warnings for coastal flooding, often with no storm in sight. This will become the new normal unless coastal flood mitigation strategies are implemented or enhanced. Communities are investing in coastal infrastructure upgrades and adaptation strategies to address current flooding issues, but concerns regarding property access and future valuation/exposure, business disruption, public health, and other such concerns are growing.

In 2019 (May 2019–April 2020), the national (outside of Alaska) median HTF frequency of 4 days tied its second highest value, and its decadal trend continues to accelerate. The U.S. annual HTF frequency now is more than twice that in the year 2000 due to rising relative sea levels (RSL), which in 2019 rose to a record-setting 0.34 m (1.1 ft) nationally relative to1920 levels.

Next year (May 2020–April 2021), acceleration in HTF and its impacts are expected to continue under near-neutral conditions of the El Niño Southern Oscillation. Nationally, the HTF outlook is 2–6 days (likely range). The Northeast Atlantic and Western Gulf outlook is 6–11 days and 5–11 HTF days, respectively. The outlook for the Southeast Atlantic, the Eastern Gulf, and the Northwestern and Southwestern Pacific coastlines are less: 3–6 days, 2–5 days, 0–7 days and 0–3 days, respectively. No HTF flooding (relative to the threshold applied here) is projected for U.S. Island coastlines.

This outlook does not consider wave and local rain effects. Under current floodplain management practices, by 2030 the national HTF frequency trend is likely to further increase by about 2–3 fold (national median of 7–15 days). In 30 years (by 2050), it is likely to be 5–15 fold higher (national median of 25–75 days), which could, in some places, imply HTF flooding would become the new high tide (~180 days/year).

Photo of flooding in downtown Annapolis, Maryland in January of 2010 by Matt Rath / Chesapeake Bay Program.