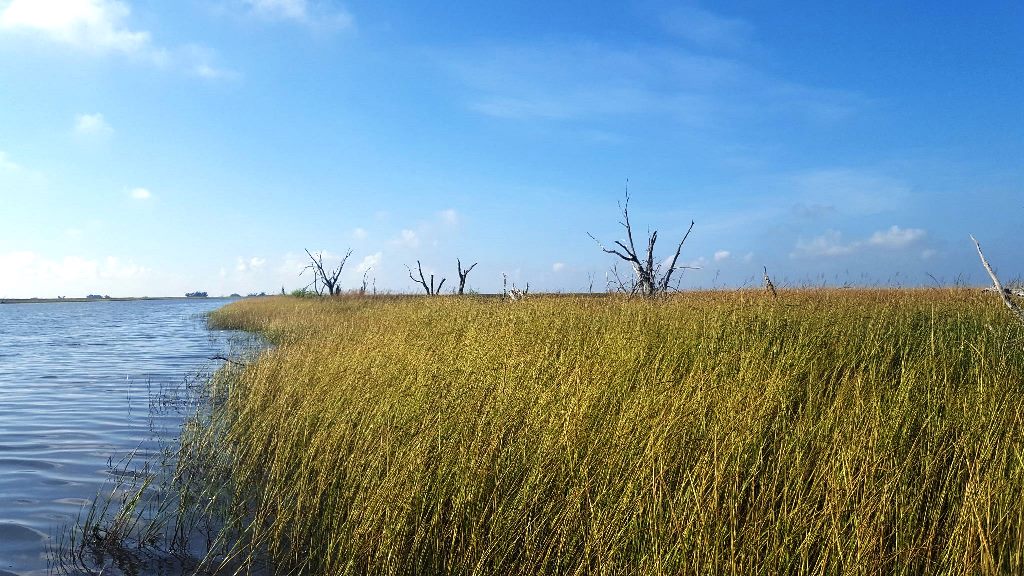 On September 13, 2019, a $160 million project to restore and nourish two barrier islands and one headland on the southern perimeter of the Terrebonne Basin of Louisiana was announced.

Restoration of the Terrebonne Basin barrier shoreline will provide a buffer to reduce the full force and effects of wave action, provide marsh to capture sediment washing over the islands, and reduce saltwater intrusion, storm surge, and tidal currents on adjacent estuaries and wetlands. Endangered and threatened species will also benefit from habitat restoration.

Approximately 9.2 million cubic yards of sand will be dredged from the Gulf of Mexico to create 1,110 acres of beach, dune, and marsh habitat on portions of Trinity-East Island, Timbalier Island, and the West Belle Pass Headland. 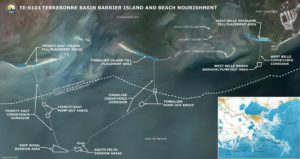 “Sustaining our barrier islands is a vital component of coastal protection. They protect interior wetland systems. They stand in front of our protection systems. And they are positioned in front of our communities. Each of these layers must work together to provide holistic storm protection,” said Louisiana Governor John Bel Edwards.

“The communities of Terrebonne and Lafourche have dedicated themselves to building a protection system, so we are ensuring that this larger network of restoration and protection can work together synergistically,” he added.

The National Fish and Wildlife Foundation (NFWF) is fully funding the project. As part of plea agreements approved by a U.S. District Court, NFWF is charged with administering more than $2.5 billion from BP and Transocean to fund projects benefiting the natural resources of the Gulf Coast impacted by the spill.

“The National Fish and Wildlife Foundation is proud to have awarded funds to this barrier island project, which will have a meaningful impact on the resilience and sustainability of Louisiana’s coast,” said Tanner Johnson, Director of NFWF’s Gulf Environmental Benefit Fund. “Working in partnership with CPRA, these islands were not only identified as eligible for funding under the Gulf Environmental Benefit Fund, but also as critical to the protection and restoration of the entire lower Terrebonne basin.”

Coastal Protection and Restoration Authority (CPRA) Board Chairman Chip Kline noted, “This project stands as yet another shining example of how through partnership, we can build bigger projects. The National Fish and Wildlife Foundation coordinated extensively with other entities responsible for oil spill funding when evaluating this project. The Bureau of Ocean Energy Management, for the third time, has granted us permission to take over nine million cubic yards of sand from Ship Shoal in federal offshore waters.”

The West Belle Pass Headland project extends and replenishes approximately 500 acres of beach, dune and marsh, while extending a sand spit from an earlier project. This headland will help protect Port Fourchon and the vital Highway 1 roadway.

The Timbalier Island restoration extends along the eastern portion of the island and includes the construction of beach and marsh components for a total of approximately 400 acres.

Terrebonne Parish President Gordy Dove thanked the governor and CPRA for partnering with the parish on dozens of protection and restoration projects. “Since 2008, we’ve completed 16 projects totaling $355 million, and there is a lot more happening now and in the pipeline,” said Dove.

“With this barrier island project and our ongoing Morganza to the Gulf hurricane protection project, that’s $564 million in projects under construction. And we’re looking at $984 million for eight more in engineering and design so they can move into construction. All told, it’s a $1.5 billion accomplishment between Terrebonne Parish and its State and Federal partners,” he added.

The restoration of Trinity-East Island includes a 1,000-foot wide beach on the west end of the island which will be fronted by existing dune habitat. Older manmade canals in the central portion of the island will be filled in to prevent breaches threatening to split the island. Approximately 200 acres of beach habitat will be restored.

Officials representing the area in the Louisiana Legislature echoed Kline’s message on the benefits of cooperation and teamwork to achieve big results:

“I’ve been a big proponent of prioritizing protection projects over restoration,” said State Senator Norby Chabert. “But I see this as restoring the protection we once greatly benefited from, our barrier islands. There are a lot of projects we need, but restoring these links in the chain are something we must do.”

“Last year we restored an incredible 933 acres on Whiskey Island on the basin’s western side, but this project will surpass that massive amount,” said State Representative Jerome Zeringue. “The people at CPRA work hard to accomplish projects like this, and we all need to support them in finding additional funds to continue the work that will literally save our land.”

“The Legislature has overwhelmingly voted to support CPRA’s Coastal Master Plan and its annual spending plans that come before us,” said State Representative Tanner Magee. “The results have been increasingly evident, and right now CPRA has more hurricane protection and restoration projects under construction than in any other year in Louisiana history.”

Weeks Marine, with a branch headquarters in Covington, won the construction bid. Dredging is expected to begin in early 2020 and is projected to take approximately two years to complete.