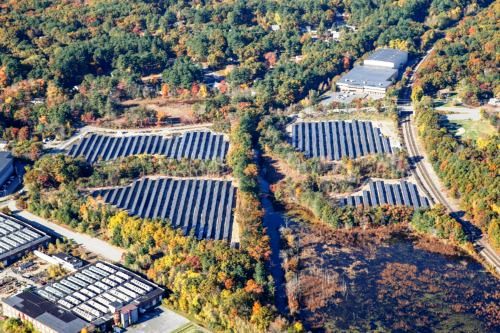 Power generated by the project’s 11,204 photovoltaic panels will supply an average of 20 percent of the offtakers’ electricity needs at costs below local utility rates and will offset nearly 6.9 million pounds of carbon dioxide, the equivalent of burning more than 3.3 million pounds of coal, annually.

Tenaska is the primary investor in the solar facility with Soltage acting as the power plant co-owner and operator, selling the electricity to the schools and town through 20-year net metering credit agreements. The project also qualifies for Massachusetts’ solar renewable energy credit II (SRECII) program – assisting the Commonwealth in meeting its renewable energy targets – receiving the third-highest incentive levels available under the program because it was developed on a brownfield.

“Our schools and local governments should never have to decide between rising electricity prices or expanding opportunities to those they serve,” said Jesse Grossman, Soltage co-founder and CEO. “Distributed solar projects like this create tangible benefits for energy purchasers by locking in electricity costs well below utility rates, as well as for the state and local communities by returning brownfield areas to productive use.”

Tenaska, one of America’s leading independent energy companies, is acting as the primary investor and will co-own the project as part of a portfolio investment it made with Soltage for new asset construction in late 2015.

“We are very pleased with the successful and timely completion of this second solar project in our distributed solar portfolio managed by Soltage,” said Tim Hemig, Tenaska Senior Vice President. “We think it is a significant win-win to generate clean, renewable solar power from brownfield sites like this one.”

The project is located on a 553-acre brownfield industrial complex which included manufacturing and rail yard maintenance facilities, open storage areas, landfills, and former wastewater lagoons all surrounded by residential properties and wetlands.

Tenaska is consistently ranked by Forbes magazine as one of America’s largest privately held companies, with approximately 7,000 MW of power generating assets under management, including approximately 280 MW of utility-scale photovoltaic in operation.

America’s solar market added more than 14 gigawatts in 2016, with Massachusetts expected to add 340 MW new solar generation capacity for more than 1,300 MW installed capacity at the end of 2016. Massachusetts ranked second in the nation for solar employment in 2016 with more than 14,500 jobs – roughly one solar job for every 300 overall jobs statewide.

About Soltage: Soltage is a leader in the development, financing, and operation of utility-scale solar power systems for commercial, industrial and municipal customers across the United States. Soltage has developed 38 solar energy projects with more than 100 MW total distributed generating capacity under management. Soltage is backed by a group of investors including Tenaska and is headquartered in Jersey City, New Jersey.

Photo of facility in North Billerica by Greg M. Cooper of Soltage LLC.