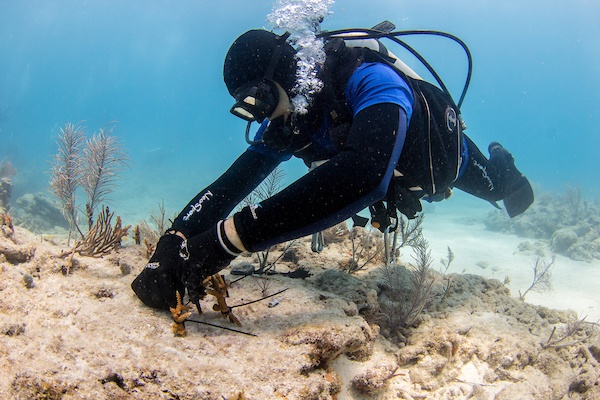 “The iconic reefs of the Florida Keys, including Eastern Dry Rocks, are the basis for thriving ecosystems underwater and the critical tourism economy on dry land. But they remain under severe threat,” said Allison Alexander, Vice President of the National Marine Sanctuary Foundation.

“Working with our partners at NOAA Office of Habitat Conservation and Florida Keys National Marine Sanctuary and our Florida Keys chapter, this project will transform how we address coral reef degradation and engage communities in stewarding our ocean. We appreciate the tremendous support from NFWF, NOAA, and the partners of the National Coastal Resilience Fund for this critical effort,” he added.

The partners will work with NOAA’s Office of Habitat Conservation and Florida Keys National Marine Sanctuary on an unprecedented ecosystem-scale reef restoration. The project will undertake the outplanting of more than 60,000 staghorn and elkhorn corals, and engage professional divers and community stewards to clear nuisance species and debris from the reef to prepare and maintain the restoration site. Finally, the partners will monitor the restoration’s success and its benefits to coastal resilience.

“One of the most vital ecosystems in the world are coral reefs, the rainforests of the sea. Florida’s Coral Reef not only provides the foundation for immense biodiversity, critical ecosystem services and Mother Nature’s shoreline protection for our communities, but also supports over 70,000 jobs in the Florida Keys,” said Mote Marine Laboratory & Aquarium President & CEO Dr. Michael P. Crosby.

“Unfortunately, this vital ecosystem is slipping into functional extinction before our eyes. Mote’s role as a core partner in Mission Iconic Reefs is to integrate our significant knowledge and expertise of innovative resilient restoration science with the important assets of our partners. We look forward to working with the Sanctuary, and all our community partners, in this strategic effort to restore Eastern Dry Rocks,” he explained.

In 2019, NOAA announced Mission: Iconic Reefs, an initiative to restore nearly 3,000,000 sq. feet, about the size of 52 football fields, of the Florida Reef Tract – one of the largest strategies ever proposed for coral restoration. IR is the product of a public/private partnership of subject matter experts from government, academia, and the private sector to plan for comprehensive reef-scale restoration in the Florida Keys National Marine Sanctuary. This project is the first of its kind in the Florida Keys to comprehensively address the restoration needs at one site and it will represent the largest coral restoration project in the region.

Residents of the Florida Keys value the benefits that the reef tract provides to their communities and economy, and they strongly support reef restoration. In 2019, the Foundation released a study showing that economic activity generated in Florida Keys National Marine Sanctuary is responsible for contributing $4.4 billion and 43,000 jobs across the state of Florida.

“This grant signals a turning point for reef restoration; it is a hugely significant contribution to the ‘Mission: Iconic Reefs’ effort. For CRF™, kicking off the work at Eastern Dry Rocks is about more than the 35,000 corals we will be providing, we see this as the beginning of an era of focused cooperation around reef restoration. And it is happening not a moment too soon,” said Scott Winters, CEO, Coral Restoration Foundation.

Coral reefs are effective in mitigating coastal hazard risks and increasing coastal resilience. They provide substantial protection against coastal storms and storm surges by reducing wave energy by an average of 97 percent. The structural complexity of coral reefs plays a crucial role in dissipating wave energy and protecting coastlines. With its proximity to Key West, the most populous community in Monroe County, the reef at Eastern Dry Rocks provides a natural defense from coastal storms and storm surges.