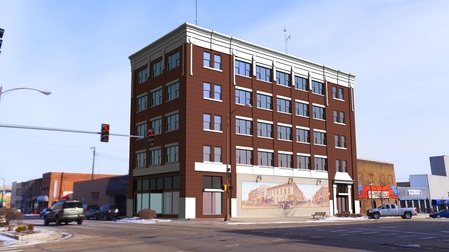 An October 13, 2016 event kicked off a 10-month construction period for Sterling, Illinois‘ $5.6 million affordable housing project called Lawrence Lofts, a partnership with developer Economic Growth Corporation. The project is the latest example of the nonprofit’s comprehensive approach to city revitalization.

The Lawrence Lofts project is considered a milestone in the city’s downtown and riverfront revitalization efforts. It is hoped that adding affordable housing within walking distance to downtown services and amenities brings the economic benefits of a mixed-use approach.

The Lawrence Lofts development will provide downtown urban options for individuals seeking affordable housing within walking distance to services and amenities. Additionally, the development also saves the Whiteside County Extension Courthouse by removing the financial burden of maintaining the aging vacant upper stories, allowing the County to maintain its ownership of the Lawrence Building’s first floor and presence in downtown Sterling.

The upper stories of the Lawrence Building have been vacant since the 1960’s. GROWTH’s adaptive-reuse redevelopment of the upper stories of this historic building stimulates the economy, feeds the local tax roles, creates and supports jobs, and citizens are provided with equal, fair, and quality housing opportunities. ​

“Adding a residential component to the downtown is huge,” said Janna Groharing, executive director of Sterling Main Street and Sterling Today. “There is a lot of momentum building in the downtown – we’ve seen five new businesses open in the last few weeks.”