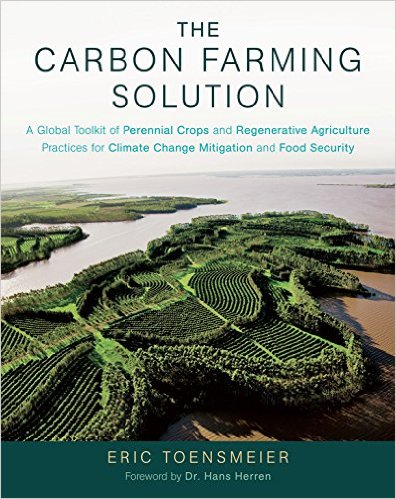 As the climate crisis heats up, agriculture is in the hot seat, not only as a contributor to climate change, but also as a potential solution.

Eric Toensmeier has spent the last several years tracking both. A lecturer at Yale University, a senior fellow with Project Drawdown, and the author of several books on permaculture, Toensmeier is also the author of the newly-released book, The Carbon Farming Solution: A Global Toolkit of Perennial Crops and Regenerative Agriculture Practices for Climate Change Mitigation and Food Security.

Toensmeier argues that when combined with immense reduction in fossil fuel emissions and adaptation strategies, carbon farming has the potential to return the carbon dioxide in our atmosphere to the “magic number” of 350 parts per million, while feeding people, building more fertile soils, and contributing to ecosystem health.

What’s surprising is the remarkable scale at which carbon farming is already taking place around the globe, particularly in the tropics. Multistrata agroforestry is practiced on 100 million hectares around the world. Silvopasture is currently practiced on 450 million hectares. Systems of rice intensification, which reduce water use and increase yields, are actually done on a bigger scale globally than organic agriculture.

Las Cañadas, a cooperative in the state of Veracruz, Mexico is doing all of those things and doing them well. They also keep meticulous records of labor, costs, nutrient cycling, and soil tests. And they do it not for demonstration purposes, but for food for members of their cooperative.

They’ve planted 50,000 native trees to reforest overgrazed parts of the land. They practice silvopasture, as well as intensive silvopasture, which is even cooler. Intensive silvopasture means that fodder trees are planted every square meter to be browsed repeatedly by livestock. When timber and other trees are added, intensive silvopasture sequestration rates are extremely high. They have a dairy where they make their own cheese and yogurt. They grind corn and make their own tortillas. They have composting toilets. They don’t have the kind of Board of Health and building codes that we have in the U.S., so they’re able to really go there with carbon farming in a way that’s exciting to see. The Mexican government approached Las Cañadas to run carbon farming trainings for farmers across the country.