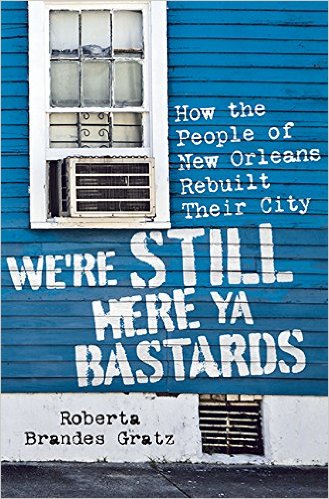 A crisis is a moment of reckoning. By altering or destroying the status quo, a crisis opens things up, making visible what is often submerged, making possible what is usually thought otherwise.

In 2005, Hurricane Katrina laid bare the deep inequalities in the city of New Orleans, while clearing paths for reform and change.

In her new book—We’re Still Here Ya Bastards: How the People of New Orleans Rebuilt Their City—Roberta Brandes Gratz tracks efforts to reshape the city in the wake of the storm.

Gratz is a self-proclaimed urbanist in the tradition of Jane Jacobs, and here, as in her previous books, she scours the city for stories of grassroots activism.

She ably describes multiple frames of reference—historic preservation, infrastructure, crime, sustainability, public health, education, and planning—in order to outline a constellation of interconnected issues, showing how the physical shape of the city reflects its politics and policies.

But while the issues change, Gratz’s approach stays the same: these are stories of heroes and villains, of individual resilience against structural ineptitude.

As she writes, “The story of the regeneration of New Orleans after the storm is filled with tales of the impossible being accomplished by those too naïve to know that it ‘can’t be done,’ or those determined to just do it and ask permission afterward.”