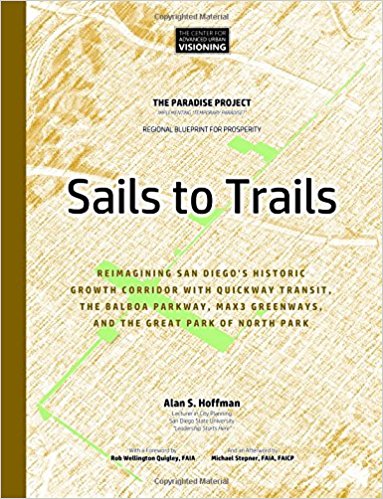 Although it focuses exclusively on one city, I (Storm) am featuring it hear because one of the most powerful ways to revitalize a place (whether an ecosystem of a city) if by reconnecting it. Combine that with repurposing and renewing its assets, and you have the 3Re Strategy.

Here’s an excerpt for the book’s Foreword by Rob Wellington Quigley, San Diego’s “star” architect, and the main designer of their spectacular new main library:

“This is a remarkable document—insightful, inventive, controversial, and refreshingly grand in scope. Urban planners tend to focus first on making “places” and envisioning the qualities those places might have to make a more vibrant and delightful community experience. Later, transportation experts figure out how to move people to and from the places.

Mr. Hoffman, by contrast, starts with transportation infrastructure (and its long history of public funding) and shows how it can be leveraged to enhance the public realm, seed neighborhood redevelopment and guide growth. He builds on the transportation network with a holistic and inclusive view stretching from mundane infrastructure upgrades to grand catalytic public open space. Our current bureaucratic thinking does just the opposite of course. Each problem and opportunity exists in isolation and is problem-solved as such.

Mr. Hoffman proposes a series of innovative public open spaces and green connections that seem almost alarming in our park-scarce mid-city. Yet, as the provided examples show, the proposals are quite reasonable when compared to the cities that we like to visit or live in. And will be absolutely necessary as the area increases in density.

Much more than a planning exercise, [Sails to Trails] illustrates how San Diego might urbanize gracefully in a manner that maximizes our return on investments in infrastructure. It is sure to provoke thoughtful and meaningful dialogue about our urban future.”

See Sails to Trails on Amazon.com.