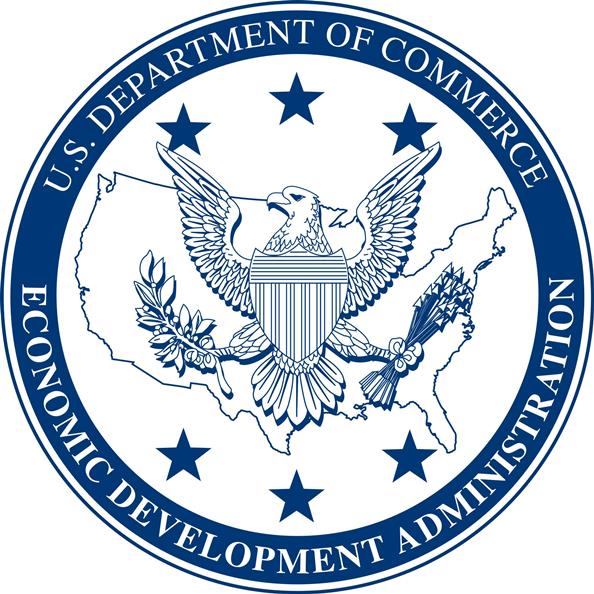 There’s no question that the Economic Development Administration (EDA)—which is part of the U.S. Department of Commerce—is in great need of increased funding and more efficient organization, and that’s the main thrust of the recommendations in this report.

But another EDA weakness is one it shares with most federal and state programs that are intended to help economically revitalize communities—or make them more resilient—lack an actual process for achieving revitalization or resilience. Those two goals should usually be pursued together, since (as described here) the same activities are needed to produce both revitalization and resilience: repurposing, renewing and reconnecting the local natural, built and socioeconomic assets. 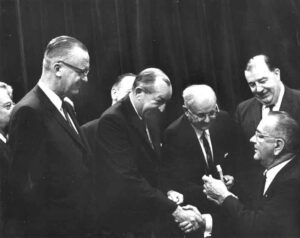 President Lyndon B. Johnson at the signing of the Public Works and Economic Development Act of 1965.

That results in two common mistakes: 1) money is just handed to communities, with the assumption (usually mistaken) that local leaders know how to turn it into revitalization; and 2) the money is earmarked for specific projects, but there’s no ongoing revitalization program to build the momentum needed to reverse the downward trajectory of a community.

Projects are crucial, of course, but revitalization seldom ensues unless they are part of a long-term effort designed to build confidence in the future (as described in the 2020 book, RECONOMICS: The Path To Resilient Prosperity.) Increasing confidence in a better local future is crucial to attracting investors, employers and residents…and to retaining the ones already present.

The closest the report comes to addressing how well the funds are spent locally is in this one recommendation: “Second, the EDA should administer an efficient national corps of deployable talent—for example, a ‘fellows’ program that places qualified economic development professionals in local and regional organizations. These fellows could help local organizations develop regional planning strategies, organize civic planning processes in preparation for competitive grants, put together competitive grant applications, and design and execute key initiatives.”

Here’s an excerpt from the beginning of the report:

“Congress has recently shown serious interest in reauthorizing the Economic Development Administration (EDA), a Department of Commerce agency last authorized in 2004. Congressional appropriators will also have their turn in adequately resourcing the agency, following the extraordinary demands of the pandemic and other impacts to local economies over the past two years.

The urgency and importance of congressional attention cannot be overstated. America’s global economic standing is under threat as digital disruption, the race for talent, and widening inequality both within and across regions challenge the nation’s competitiveness. Meanwhile, the U.S. economy regularly confronts recessions, extreme weather events, supply chain breakdowns, and other shocks that disproportionately impact some local economies and further test the nation’s collective ability to adapt and maintain economic resilience over the long run.

In response, the country needs to marshal the economic assets that cluster in specialized ways across the regions that make up the U.S. economy—be they leading industries, research universities, entrepreneurs, or workers. These assets are critical if the nation hopes to, for instance, reduce its reliance on imports and boost supply chain resilience with greater homegrown capabilities in computer chip, renewable energy, and medical equipment design and production. Furthermore, regions with strong innovation, economic diversification, and civic capacities are more able to adapt and bounce back from economic disruptions. For these reasons, the federal government has a vested interest in spurring place-based regional economic development. To do that, it has the EDA—the one federal agency whose sole charge is to promote economic revitalization in communities of any scale, rural or urban, across the country. In short, the EDA’s role is essential if the U.S. is to compete globally and prosper locally.

The concern is that the EDA is not properly resourced or equipped to meet its vital mission and nationwide mandate. The agency is tasked to do too much with too little—its chronically small annual budget, combined with unpredictable special appropriations, positions the agency as marginal when, in fact, the opposite is true. The EDA is the nation’s indispensable agency for supporting economic growth and resilience for communities large and small, as their leaders respond regularly to new opportunities and threats. But the policy and budget process does not yet treat it accordingly.

Congress can do its part. It can use reauthorization, now decades overdue, to elevate and modernize the EDA. It can give the agency the tools and resources to match its mandate, so it can successfully help communities and the nation adapt and rise to the immense challenges of the 21st century economy, including the range of economic disruptions today and those to come. EDA reauthorization deserves bipartisan attention and action.

To inform this process, this brief provides a rationale and framework for EDA reauthorization. It is organized in three sections. First, it expands on the case for a federal role in regional economic development. It then shows why only the legislative process can better equip the EDA to improve America’s capacity to innovate, compete, and expand economic opportunity for more people in more places. The brief closes with how: We recommend that the EDA become a $4 billion agency with a sharper purpose and set of roles and capabilities that match that mission. We believe this framework for EDA reauthorization and future appropriations would set the agency and its community partners up for success in today’s—and tomorrow’s—economy.

The authors of this brief have worked for decades with local, state, tribal, and national leaders on economic development planning, strategies, and execution. We are attuned to the demands placed on economic development actors across urban and rural communities, small and large regions, tribal nations, and downtowns and Main Streets. We are familiar with the complexity of implementation in areas such as innovation, talent development, finance, community economic development, placemaking, infrastructure, and regional and environmental planning. We came together to test a simple proposition: That despite our diverse backgrounds and experiences in economic development, we could agree on the importance of making the EDA a high-performing federal partner in spurring innovation and economic renewal for every region of the country and a policy framework for how to make that happen.”