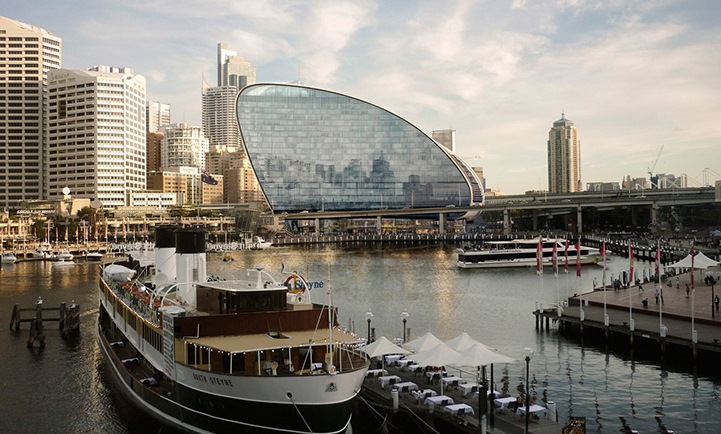 In late 2015, I (Storm) was in the states of New South Wales and Western Australia for three weeks, doing work for the Planning Institute of Australia and the Green Building Council of Australia. 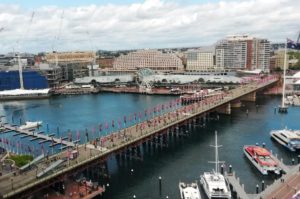 While in Sydney, my wife and I stayed at the Four Points Sheraton, with a great view of beautiful Darling Harbour.

The harbor’s aesthetics and functionality are marred by only one thing: a horrendously-planned waterfront highway that cuts it off from the downtown.

Now, a gorgeous new building designed by Hassell Studio is being sandwiched into the space between two spans of that highway to reconnect Darling Harbour to the heart of Sydney.

The Ribbon will fill a dead space in Sydney’s skyline, and transform it into an extraordinary new gateway to the western side of the city’s Central Business District.

Named for its undulating form that rises through two elevated roadways, the building’s organic, flowing shape appears to peel up the surrounding roadways and manipulate them into a new structure that complements the changing landscape between the high rise city to the west and Darling Harbour to the east.

Statistics about The Ribbon:

The development will contain modern new premises for the IMAX theatre currently on-site and make the public spaces at ground level more vibrant and engaging for visitors. 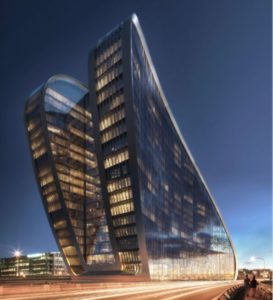 The Ribbon will also improve sightlines over the harbor and create pedestrian connections across Cockle Bay and from the harbor through to Darling Quarter.

Once completed, The Ribbon will form a critical link between the city center and the new Sydney International Convention, Exhibition and Entertainment Precinct and the huge Barangaroo waterfront redevelopment.

Barangaroo has been featured previously in REVITALIZATION: here, here, and here.

HASSELL Studio is a leading international design practice with studios in Australia, China, South East Asia, the United Kingdom, and the United States of America.

All renderings are courtesy of HASSELL Studio.