Sitting in the middle of New York City‘s East River, Roosevelt Island is just under two miles long and 787 feet wide. Visitors and residents alike consider it a a pedestrian’s paradise, with fantastic views of the Manhattan skyline, miles of wide sidewalks, and plenty of parks to traverse.

The island was called Minnehanonck by the indigenous Lenape, Varkens Eylandt (Hog Island) by the New Netherlanders, and Blackwell’s Island during the colonial era. From 1921 to 1971, it was known as Welfare Island when it was used primarily for hospitals. Finally, it was renamed Roosevelt Island in 1971, in honor of former U.S. President Franklin D. Roosevelt. 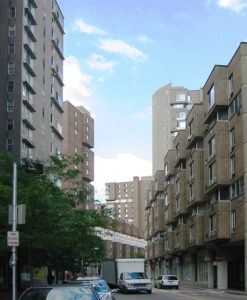 A typical view inside Roosevelt Island.Photo by Anonymous via Wikipedia.

Roosevelt Island is owned by the city, but in 1969, it was leased to the state of New York’s Urban Development Corporation for 99 years. Most of the residential buildings on Roosevelt Island are rentals. There is also a cooperative (Rivercross), and a condominium building (Riverwalk).

It’s home to several forward-thinking projects from the 20th century. After centuries of development and redevelopment, one wouldn’t think there was any place left for something large and new. But now, Cornell Tech, the technology-focused campus of Ivy League Cornell University (based in Ithaca, New York), is building a new campus that dominates the eye on the mostly-residential Roosevelt Island.

The development, which will feature dorms, offices, classroom buildings, restaurants, and a hotel, will span 2 million square feet.

Costing an estimated $2 billion, the campus will open in 2017. The university received $100 million in capital funding from the city to help build the campus. The history and people of Roosevelt island are the perfect complement to the university’s goals of being tech driven, outward facing, and community oriented.

“We were big advocates for the Roosevelt Island site for Cornell Tech because it was within walking distance to mass transit and had reasonable transportation time to major hubs within the city,” said Colin Koop, New York design director at Skidmore, Owings & Merrill (SOM). “

The end result is essentially an anti-quad campus,

” he continued. “The public can come into the buildings for lunch or to use a meeting space, and then when they’re finished they can walk through the school’s park.”

“I’m not aware of any other university doing that, at least in the United States,” said Koop. “Though, many other universities are now visiting and taking note. It was a pleasant surprise to see New York City, Cornell, and SOM cooperate for the greater good.” (Note from Storm: Koop was right to specify “in the United States“, because the newly-redesigned campus of the Tecnológico de Monterrey in Monterrey, Nuevo León, Mexico used a very similar principle of reconnecting to the community, as described in this February 1, 2017 REVITALIZATION article.) 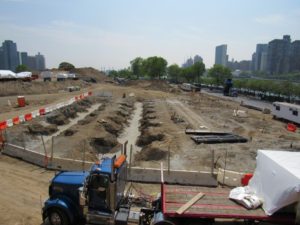 The centerpiece of Phase One is the new Bloomberg Building, designed by Morphosis Architects. It uses solar power; geothermal ground source heat pumps; a dynamic energy-efficient facade which balances transparency and opaqueness to maximize building insulation; and an array of smart building technologies that monitor lighting and plug load use, among other metrics.

Universities are integral to a society increasingly turning towards innovation as a source of growth. With the flexibility and resources to undertake experimental research across the arts and sciences, these institutions make discoveries that will influence the way we live, work, and interact. Interfacing with policy makers, companies, and communities facilitates the real-world application of the research performed at these institutions and fosters an environment of collaboration and exchange.

The Cornell Tech campus on Roosevelt Island defines a new moment in Cornell University’s dedication to leading innovation, partnering with Technion University to create a multi-disciplinary research hub focused on technology and entrepreneurship. Emphasizing connectivity and engagement with its local urban context, the campus represents new academic, technical and business opportunities not only to the City of New York but also to the borough of Queens and the local Roosevelt Island community. 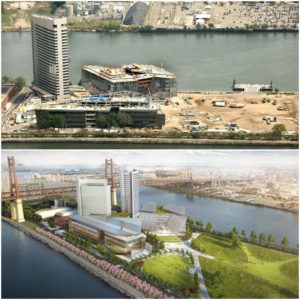 How the campus site looks today, vs. how it will look soon. Images courtesy of Cornell Tech.

Supporting a legacy of rigorous and visionary work in the applied engineering fields, the Bloomberg Center provides graduate level students, faculty, administrators and visitors an inspiring new facility for research and learning. The building design reflects the school’s joint goals of creativity and excellence, providing flexible academic spaces and pioneering new standards in building performance and sustainability. The key design concepts for the project are to support, augment and foster interdisciplinary communication among all building users; provide leadership in environmental and sustainability goals through a high-performance net-zero building design; complement and invigorate the Roosevelt Island community.

Understanding research and innovation as a collective enterprise, the Bloomberg Center is a low, four-story building encouraging openness, communication, and interaction. A publicly accessible, ground floor café is located at the southern end of the building with views to the southern end of the island as well as Manhattan and Queens. The entry atrium, aligned with Manhattan’s 57th Street, connects building users with Manhattan views across the river. Visible from the campus’ Tech Plaza, a monumental stair rising from main lobby guides vertical circulation to all levels.

Highlighting Cornell Tech’s river-to-river campus, the main stair looks out onto Queens through a viewing corridor framed by the Co-Location Building and the new residential tower. An open galleria extends throughout the length of the building, serving as a shared avenue for informal encounters, discussions and collaborations. Enclaves for impromptu meetings line the main galleria, with conference rooms and multi-purpose meeting areas capping the ends. A convenience stair provides further connection to the second, third and fourth floor research labs and collaborative meeting spaces.

Aligning with Cornell Tech’s inter-disciplinary academic mission, the design merges site planning, building planning, engineering and architecture into an integrated and performative solution. An energy canopy supporting a solar panel array maximizes the site’s energy performance while shading the roof surface of the building to support thermal regulation and reduce load. Other sustainability measures include a geothermal well system, a rain water collection tank for building and site use, as well as smart building technology to control building engineering systems. Striving for a net-zero and LEED Platinum rating, the Bloomberg Center sets a new benchmark for New York City building and campus design.