In the long-struggling city of New Haven, Connecticut, city officials have been showcasing the latest developments of their Long Wharf revitalization project. 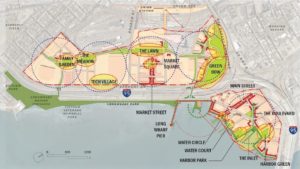 New Haven’s waterfront has played a central role in the city’s history.

But as in many cities along the Northeast Corridor of the U.S., for the past half century, the city’s vital connection to water at Long Wharf has been largely cut off by poorly-planned highway infrastructure and industrial-scale land uses. As a result, a process of repurposing, renewing and reconnecting (AKA: the 3Re Strategy) is needed to revitalize the area.

Now spurred by climate threats of storm surge and flooding, creative thinking and planning for disaster resilience and adaptive and sustainable development are opening exciting new opportunities and visions for the Long Wharf area.

After over a year of analysis, planning, and community outreach, the City of New Haven released the Long Wharf Responsible Growth Plan, aiming to support the social and economic development of the Long Wharf District through strategic focus on coastal resiliency, progressive economic strategies and community engagement.

The neighborhoods are tied together by a green infrastructure park and complete street that will provide both resilient protections and transformative public enhancements.

All images courtesy of the City of New Haven.