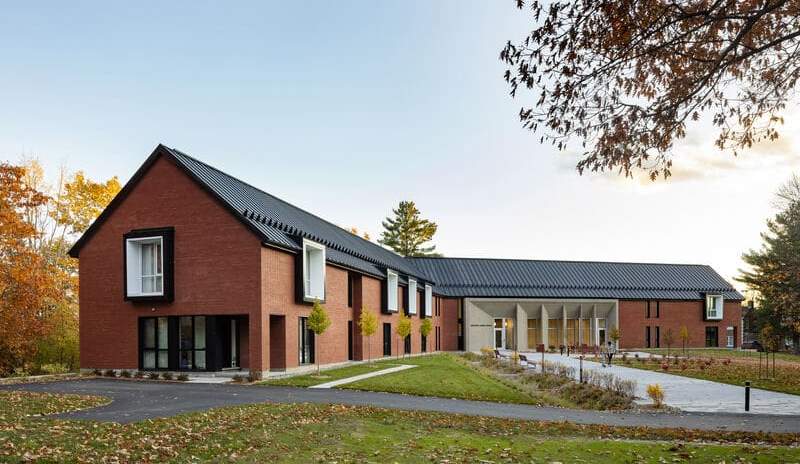 Long-time REVITALIZATION readers know that—when it comes to articles about structures—we mostly focus on the reuse of older structures. When we do report on new structures, it’s usually because they are located on remediated brownfields, on a previously-developed site (not all buildings are worth saving), or on infill properties that help revitalize a downtown or neighborhood.

This story is a bit different, although it could be considered infill. It’s about revitalizing a century-old, 250-acre school campus via a new building that better-connects the entire campus to its most important natural feature, a river. It also, of course, provides new functionality needed to keep the campus economically relevant. 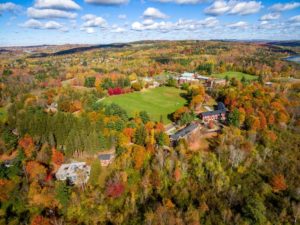 On April 13, 2020, ARCHITEM Wolff Shapiro Kuskowski architects, a Montréal-based firm, unveiled one of its most recent projects, an innovative residence for young students. Built for Bishop’s College School, this private boarding school provides a family-style environment for 270 students, age 12 to 17, coming from 37 different countries.

Located near Sherbrooke, Québec, the century-old campus is set on a site of exceptional beauty, on the banks of the St. Francis River. The original buildings on this 250-acre campus are rooted in a long educational and architectural tradition.

The construction of an eighth residence for students, the first to include both residential and academic components, was an unprecedented response to BCS’s interest in bringing together multiple aspects of the student experience. The new building, named Mitchell Family House, faces the existing campus while establishing a close connection to the surrounding forest and nearby river. 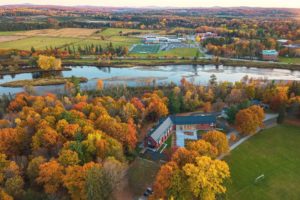 The V-shaped residence is organized in two wings hinging on a common central core. There are 18 rooms, each shared by two students, on the upper two floors. All rooms are connected to central living spaces, which include a lounge and dining/kitchen area as well as a quieter study corner on a mezzanine.

Each wing ends in a two-story apartment occupied by “house parents” and their respective families. Their main role is to ensure the well-being of a group of teens away from their family environment. Each of the two apartments communicates directly with the corridors leading to the residents’ rooms. Families access these apartments from a separate entrance away from the students’ entrance.

The carefully planned circulation was key to the implementation of the hybrid concept. The main challenge was to ensure the privacy and security of the young residents while greeting occasional visitors warmly. The entrance area provides two separate access points, one leading to the private residential wings and one to the public common areas.

On the lowest level, dedicated to academic activities, one finds various multi-purpose spaces including a studio/office for a scholar-in-residence. The entire floor opens up to an outdoor agora connecting students and staff with the natural beauty that surrounds the building. Small-group events can also take place in this unique environment. Resembling a giant lantern, the common area’s central volume illuminates the exterior space at night. 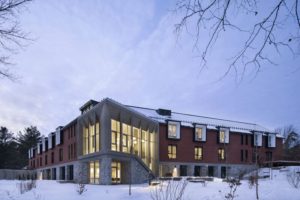 The mandate required that the building reflect its time yet be evocative of the existing campus’ architectural vocabulary, its scale, and its material palette. The architects opted for brick on all façades in a spirit of continuity, but also to celebrate the long brick-making tradition of the nearby town of Lennoxville. Wood was used on the interior to add warmth to both the public and private entrances, the stair volumes, and the social nodes.

The stone used on the campus heritage buildings was substituted by sculptural pre-cast concrete to give the new residence a contemporary signature. At the main entrance area, individually designed concrete fins signal the presence of the access points. Non-residents are directed towards the more public entrance, which fans out in the direction of the campus. The private entrance to the residential wings is treated in a more intimate way.

At the back of the building, sculptural concrete elements are introduced to create a strong gesture in the direction of the forest and the river. The concrete blades accentuate the presence of the stairs leading down from the student lounge area while acting as a device to filter the strong morning and afternoon light. The source of inspiration is traditional but the image is resolutely contemporary.

The architects’ intention was to reduce the building’s carbon footprint to a minimum. Highly efficient mechanical systems and triple glazed windows were among the means used as well as prefabricated wall panels insulated from the outside.

The residence was connected to the campus’ central geothermal system. Four new wells were drilled on site to respond to the building’s heating and cooling requirements. In addition, a heat recovery system was introduced to pre-heat incoming fresh air during the winter. This air is subsequently brought to required temperatures in part by geothermal water to air heat pumps. 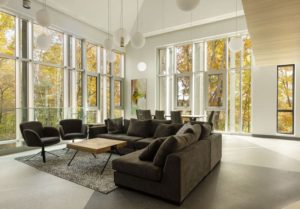 Particular attention was paid to water management on the site, especially given the building’s steep roof. As it reaches the ground, rainwater is channeled towards two retention basins to prevent water from reaching the natural woodland areas. Surface runoffs are also directed towards the basins in order to protect the riverbank from erosion.

The site’s “renaturalisation” process was initiated as soon as the building was completed. The landscape architects reintroduced native trees, ferns, and shrubs on the grounds in order to blend in the natural surroundings. Bollards were installed throughout providing low lighting in accordance with local sky protection bylaws. Vehicular traffic is kept to a minimum on the site for better enjoyment of the surrounding nature.

Founded in 1986, ARCHITEM Wolff Shapiro Kuskowski architects was one of Canada’ first architectural firms to be led by women. It evolved from a close collaboration among architects Andrea Wolff, Elizabeth Shapiro, and Magda Kuskowski. The team was later joined by Mira Katnick who became the firm’s fourth partner in 2006. Today, the firm is known for its institutional, commercial, and residential projects as well as its interior design work.

All photos are by Maxime Brouillet.