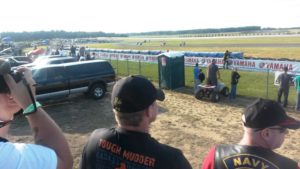 Motorcycle races at the New Jersey Motorsports Park in Millville, one of the newly-added communities (and which has a lovely downtown!) Photo credit: Storm Cunningham.

“The existing business lease program has already made an impact on the communities we targeted during the pilot phase, so expanding it to include more municipalities is the next logical step,” he added.

The NJEDA launched the BLI and accompanying Business Improvement Incentive (BII) pilot programs in 2017 to revitalize commercial corridors around the state by attracting small businesses and incentivizing street-level building improvements.

The BLI program reimburses businesses and nonprofit organizations fifteen percent of annual lease payments for two years when they rent market-rate, first-floor office, industrial, or retail spaces for a minimum 5-year term. Businesses in the program can lease spaces of any size, but BLI only provides reimbursements on the first 5,000 square feet. The BII program offers grants of 50 percent of total project costs up to $20,000 to businesses making at least $5,000 in building improvements.

Since its launch, the BLI program has attracted new businesses to these targeted commercial corridors, bringing new life to these downtowns and providing new jobs for residents. The program requirement that businesses commit to spending at least five years in their new location has been particularly important, encouraging business owners to engage the local community and train new employees from nearby neighborhoods.

The NJEDA plans to build on this success by scaling the BLI program to include eight additional Urban Enterprise Zones with designated Main Streets. The new Small Business Lease Assistance Program will be structured as a three-year pilot with $100,000 per year allocated to each of the thirteen eligible municipalities.

To ensure the greatest possible impact, the NJEDA will coordinate with the newly-added municipalities to obtain recommended areas of eligibility that fit into the city’s long-term vision, plan how to market the incentives to potential applicants, and establish a contact in each city to guide business owners through the application process.

To support this expansion, the NJEDA will devote $3.9 million to the Small Business Lease Assistance Program. Applications for the BII program will be accepted until June 18, 2019.

In addition to the Small Business Lease Assistance Program, the NJEDA also supports small businesses with low-interest loans, bond financing, and educational programs. Many of these programs place a special emphasis on supporting women- and minority-owned businesses.