This award, together with the significant interest from global companies in leasing space at the Wind Port, confirms the offshore wind industry’s strong and sustained interest in partnering with the state to turn New Jersey into an internationally recognized offshore wind hub that will drive economic growth and job creation for decades to come. 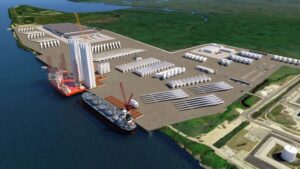 “The New Jersey Wind Port is a transformative project that will provide immediate environmental and economic benefits and set New Jersey on a path to a more sustainable and prosperous future,” said Governor Phil Murphy of this strategy for resilient prosperity. “This award and the demonstrable interest the wind industry has already shown in the project once again confirm New Jersey as the capital of offshore wind in the United States,” he added.

Offshore wind is a central component of Governor Murphy’s Energy Master Plan to achieve 100 percent clean energy by 2050. As part of that plan, New Jersey has committed to producing 7,500 megawatts of offshore wind energy by 2035.

“The New Jersey Wind Port is a forward-thinking project that will move us closer to Governor Murphy’s vision for a stronger, fairer New Jersey and cement New Jersey’s position as the U.S. capital of offshore wind,” said New Jersey Economic Development Authority (NJEDA) Chief Executive Officer Tim Sullivan. “The Strategic Infrastructure Project of the Year award recognizes this project’s transformative potential, and the significant interest from global leaders in the wind industry shows that our strategy for growing this industry in New Jersey is working.”

The New Jersey Wind Port is a first-in-the-nation infrastructure investment that will provide a location for essential staging, assembly, and manufacturing activities related to offshore wind projects on the East Coast. At full build-out, the Wind Port has the potential to create up to 1,500 manufacturing, assembly, and operations jobs and drive billions of dollars in economic growth.

The NJEDA recently announced that six leading offshore wind developers and manufacturers have submitted 16 non-binding offers to sublease space at the Wind Port that NJEDA staff have preliminarily determined to be compliant. All bidders put in multiple offers encompassing different parcels, project configurations, and levels of investments.

“CG/LA Infrastructure is honored to present the NJEDA with 2021 Strategic Project of the Year Award for the New Jersey Wind Port. With 55% of the vote, the project was selected over the SOO Green HVDC Link, the Northeast Maglev, and Clean Path NY, which were each nominated from the 2021 North American Strategic100 Top Infrastructure Projects List. As the first greenfield offshore wind port in the US under construction and given the project’s strategic place in the nascent industry’s supply chain, we celebrate the project’s milestones thus far and look forward to celebrating future phases of development!” said Colin Whelan, Director of Projects at CG/LA Infrastructure.

Headquartered in Washington, DC, CG/LA advises senior-level leaders, policymakers, investors, and infrastructure project developers from more than 20 countries across the public-private spectrum. The North America Strategic Infrastructure Leadership Forum is a two-day conference featuring more than fifty infrastructure projects and 500 infrastructure executives. The forum is not sector-specific and features projects from highways and bridges to urban mass transit and energy.

Photo by Andrew Martin from Pixabay.