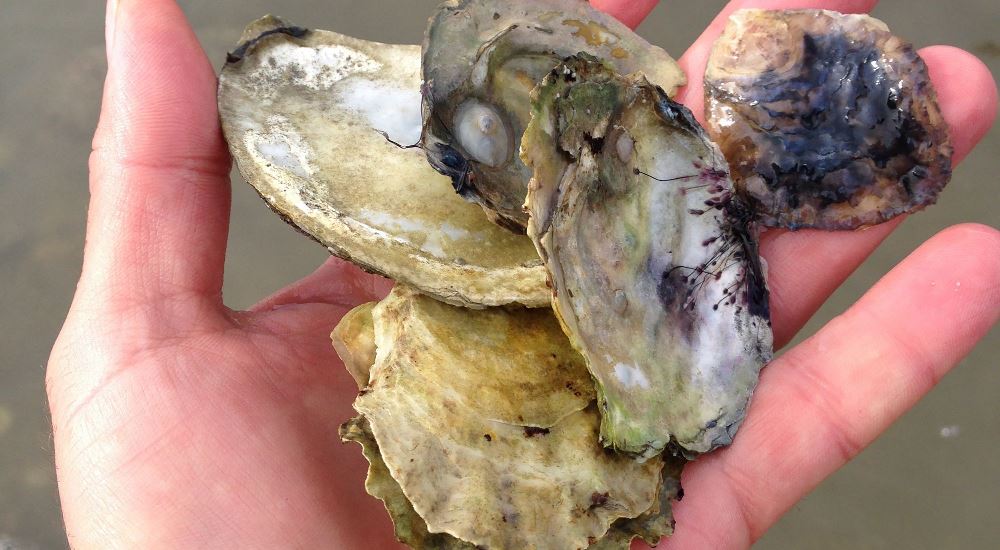 A new study from the Virginia Institute of Marine Science (VIMS) and the University of Maryland Center for Environmental Science (UMCES) has estimated the water filtration and nutrient removal capacity of the restored Harris Creek oyster sanctuary reefs for the very first time using a new web-based computer model.

The study was funded by The Nature Conservancy, the Oyster Recovery Partnership and the National Oceanic and Atmospheric Association (NOAA).

“NOAA has long supported not only restoring oysters, but also understanding the ecological impact of that restoration,” said NOAA’s Stephanie Westby. “Studies such as these are critical for quantifying that impact.”

Among the highlights from the study’s findings:

The study found that the restored reefs are able to filter the full volume of Harris Creek in less than ten days during summer months. Based on collected data, the restored reefs have the potential to remove one million pounds of nitrogen from the Chesapeake Bay over a decade.

The water filtration benefits of the reef are provided by more than the oysters. Mussels and tunicates living on the reefs contribute more than 40% of the total filtration.

The project was led by VIMS researchers Lisa Kellogg and Mark Brush, and UMCES researcher Jeff Cornwell. The foundation of the Harris Creek Model is Brush’s estuarine ecosystem model that computes how water masses, nutrients, and suspended particles move into and through a tidally-influenced waterway such as Harris Creek.

Coupled to this ecosystem model is an oyster sub-model that uses knowledge of oyster biology and ecology to compute the quantity of water, algal cells, suspended solids, and nutrients that oysters filter, incorporate into their tissues, or recycle back into the Bay. The sub-model also computes oxygen consumption and the amount of nitrogen and phosphorous removed by restored reefs.

Most recently, the research team has enhanced this coupled model by updating water-quality records through 2016, and by replacing generic oyster-related data with data collected in Harris Creek by Kellogg and Cornwell through a project funded by NOAA. The updated model also incorporates the impacts of two common oyster-reef associates—a mussel and a “sea squirt.” Like oysters, these organisms feed by filtering particles from the water—adding them to the model thus makes it more comprehensive and improves its accuracy.

“Our model,” says Brush, “is available online for anyone to use—restoration practitioners, planners, educators, scientists, or members of the public—but our primary goal was to get this type of decision-support tool directly into the hands of resource managers. That is extremely rare and has great potential for application around the Bay and in other estuaries.”

“We developed the model so that resource managers could easily estimate the TMDL-related benefits of oyster-reef restoration,” says Kellogg, adding that “the model is rooted in scientifically defensible data and designed to be readily transferrable to systems throughout Chesapeake Bay and the Eastern Shore.”

The reef in Harris Creek is the result of a restoration effort completed by a coalition of partners in 2015 that saw over two billion oysters planted across 350 acres, an area roughly the size of the National Mall. As a tributary of the Choptank River, Harris Creek eventually flows into the nation’s largest estuary, the Chesapeake Bay, where oyster populations are at a tiny fraction of their historic levels.

Recognizing their value to Bay health and the economy, in 2014 the states of Maryland and Virginia – in partnership with the federal government and private industry – renewed their commitment to restoring oysters to the Bay. Harris Creek is one of five Maryland tributaries and 10 baywide targeted for restoration as part of that effort.

“This study shows us that oyster restoration is an important and cost-effective addition to the suite of approaches that make up Bay recovery efforts,” says Mark Bryer, Chesapeake Bay Program Director for The Nature Conservancy. “What makes this such a smart investment is not just the role oysters can play in water quality, but also the numerous co-benefits that come with a healthy reef.”

In addition to their ability to facilitate removal of nitrogen and other pollutants that can be detrimental to the health of the Chesapeake Bay, oyster reefs provide a suite of co-benefits. They serve as prime habitat and foraging grounds for many other valuable and iconic species, including blue crabs, striped bass, and other sport fish.

Unlike most man-made infrastructure, oyster reefs are able to self-replenish and grow in the right conditions, thereby increasing the rate of these benefits over time. These benefits aren’t limited to restored or naturally occurring reefs. Oysters being grown throughout the Bay region by the aquaculture industry are also helping to filter and clean the water, thereby providing some of the same benefits as restored and natural oyster reefs.

“Due to the significant loss of oyster habitat over the past four centuries, it now takes Chesapeake Bay oyster reefs more than a year to filter the entire Bay, a task that historically took just a few days,” said Stephan Abel, Executive Director of the Oyster Recovery Partnership. “The Harris Creek oyster sanctuary study demonstrates that we can once again achieve the historical filtration levels needed to bring these targeted tributaries back to a healthy, balanced state.”

A report issued by The Nature Conservancy in 2013 found that more than 85% of oyster reefs had been lost worldwide, making it one of the most endangered marine habitats. Recently The Nature Conservancy has also partnered with both Virginia Marine Resources Commission (VMRC) and the U.S. Army Corps of Engineers on restoration projects resulting in 40 new acres of oyster reef in Virginia’s Piankatank River, one of five tributaries in that state being targeted for restoration.

Photo of oyster spat on an old oyster shell courtesy of The Nature Conservancy.