At this year’s Toronto Film Festival (September 6-16, 2018), Actors in the new film Sgaawaay K’uuna (Edge of the Knife), didn’t just learn their lines; they learned a language.

The movie is based on the Haida legend Gaagiixit (“the Wildman”), which was translated by Haida elders into local dialects. 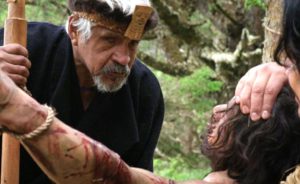 But language revitalization wasn’t the movie’s only goal: community economic revitalization and environmental protection were also central to its mission.

One of the producers, Jon Frantz, was an urban planning student of Leonie Sandercock. Sandercock is an urban planner and academic focusing on community planning and multiculturalism. She has been teaching at the School of Community & Regional Planning at the University of British Columbia in Vancouver, BC, Canada since 2001. She helped raise funding for the project, eventually bringing in some $1.8 million.

Frantz has worked on films with the Inuit community, and said the economic impact was immediately felt once production began: over $800,000 in wages for local residents working on the movie helped revitalize the community’s economy.

“Over a million dollars was brought directly into the Haida communities of Skidegate and Old Massett,” he said. “One very tangible impact is bringing employment opportunities to a remote community where it is hard to have a diversity of opportunities.”

“If only the film is a success, I wouldn’t consider it a success for the project,” Sandercock said. “Will it lead to jobs for the people who were involved? It’s about the long-term assessment for me.”

Sandercock recently received an academic grant enabling her to spend four years answering that question. She’ll measure the social, economic and environmental impact of Edge of the Knife on Haida Gwaii.

Images courtesy of Edge of the Knife.

See article in The Star Vancouver by Cherise Seucharan.