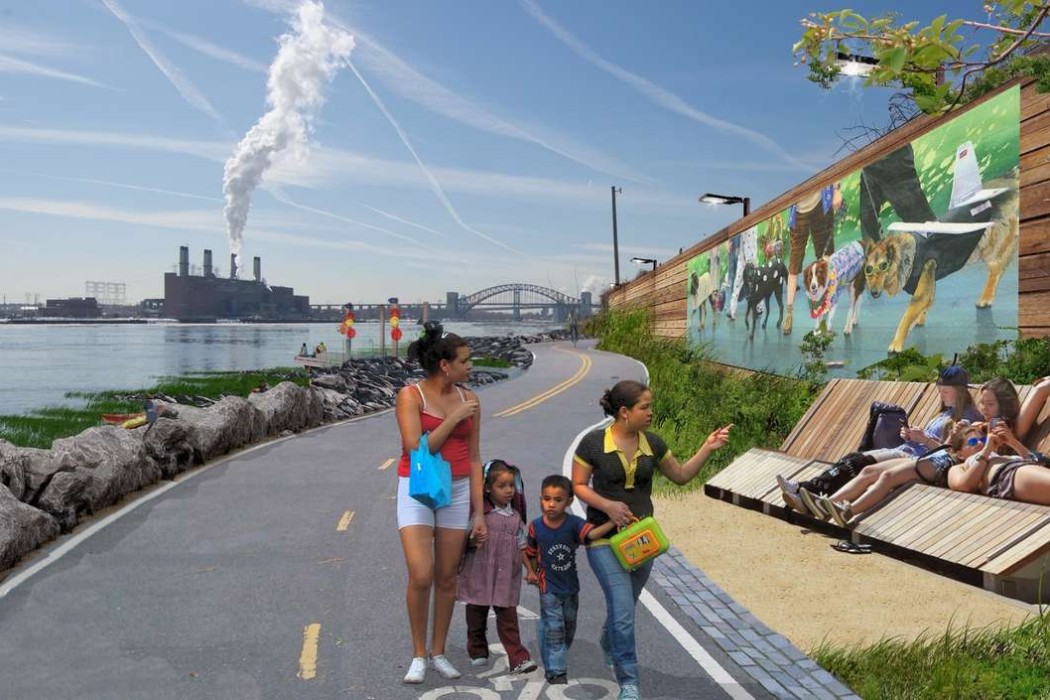 On August 5, 2015, Denver-based urban design and landscape architecture firm Civitas announced that they will be providing a key design role as part of a multi-sector, multi-disciplinary team on a transformative master plan for two health-challenged South Bronx neighborhoods.

Recently unveiled by the New York Restoration Project (NYRP), the Haven Project will design, build and secure funding for a network of connected open spaces to improve quality of life for residents in the Bronx’s Mott Haven and Port Morris neighborhoods.

The South Bronx area includes some of New York City’s heaviest industrial uses and suffers from high rates of poverty, diabetes, asthma and obesity. Working with a team of community and health partners, NYRP and Civitas have created a plan to promote physical activity, improve pedestrian safety and increase social interaction while delivering measurable health benefits for residents.

Taking the idea that green space promotes health to the next level, the Haven Project has been designed specifically to measure and monitor its mission of encouraging active lifestyles and achieving health impacts. The first-of-its-kind program incorporates data collection and evaluation by healthcare partners that include Montefiore Medical Center and Columbia University. The plan also includes an important feedback loop so collected data can inform subsequent design-and-build phases.

“Creating healthier cities is at the heart of our firm’s mission,” says Civitas founding principal Mark Johnson, lead designer for the Haven Project. Johnson is recently returned from the 11th Design & Health World Congress & Exhibition in Hong Kong, where he delivered a keynote on “Designing the City as a Strategic Tool for Improving Public Health,” including discussing the Haven Project’s groundbreaking approach to measuring the design’s health results for residents. “For 30 years we have worked to increase the social and ecological performance of our projects. Now with NYRP’s leadership we are finally able to directly impact public health in a part of New York City where health improvements are most needed.”

Existing challenges faced by the Haven Project include limited and under-resourced parks and open spaces for the 1.3-square-mile South Bronx community of more than 90,000 residents, as well as a lack of waterfront access. Monumental highway and industrial infrastructure and a vulnerable local population with poor environmental health outcomes provide additional challenges. On the plus side, the area includes a strong coalition of numerous community-based organizations, activists and concerned citizens. And the community’s vibrant cultural history includes renown as the birthplace of hip-hop, while Port Morris offers rich nautical history.

Civitas’ designs for the Haven Project work toward an ultimate goal of transforming the neighborhoods into a resilient coastal community. Planned long-term capital projects include creating a series of linked waterfront parks to take advantage of the improved air quality along the water, continuous and enjoyable walking and bicycling routes connecting green spaces, and making streets safer and more efficient to promote healthy lifestyles.

The project’s efforts also include such immediate temporary programs as planting and stewarding more than 800 trees and improving short-term safe access to the Randall’s Island Connector, a New York City Economic Development Corporation project linking the 250-acre recreational land of Randall’s Island to the South Bronx via a pedestrian bridge.

South Bronx residents have been engaged in the visioning and planning process for the Haven Project since last fall, meeting with the multi-talented advisory board that includes Civitas’ Johnson to offer specific feedback on such issues as street connectivity, existing social assets and physical barriers, as well as offering reactions to proposed design solutions. The planned first phase of the project will focus on enhancing connectivity to the southeast corner of Port Morris and establishing waterfront parks at 132nd and 134th Streets, where they meet the East River. This phase will link neighborhood nodes, creating safe and welcoming corridors, and provide access to large open spaces including Randall’s Island.

Founded by Bette Midler in 1995, NYRP has a 20‐year track record of beautifying open space to cultivate community in low income neighborhoods, revitalizing Northern Manhattan parks and maintaining 52 community gardens across the city. The Haven Project takes this unique model to scale, leveraging private resources to improve the public realm across entire neighborhoods, with a real, measurable impact on quality of life and health.

“NYRP has created green spaces in underserved communities for nearly two decades, and what we know is that trees, gardens and open space do much more than beautify neighborhoods – they transform lives,” said Deborah Marton, Executive Director of New York Restoration Project. “The Haven Project’s plan for new open spaces in Mott Haven and Port Morris will improve the health of its residents and create a new destination for the South Bronx, encouraging active lifestyles and building social capital.”