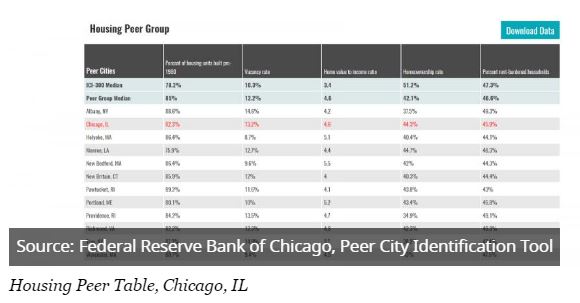 Most cities have done a poor job of finding peer cities to compare themselves with, in order to establish reasonable benchmarks based on their selections.

Most urban policymakers usually evaluate cities that are physically close to them, or similar in population size, or culturally similar. That can lead to some misleading comparisons. The cities of Detroit, Washington, Boston and Portland are nearly identical in population, with fewer than 30,000 people separating them. Does that make them similar? Nashville and Memphis are similarly sized and located within the same state, but they’re vastly different cities in terms of economy, demographic composition, age, education, housing, and other factors.

Ultimately this can result in misleading comparisons, pushing some cities to seek a policy path that was easily achievable and successful for one city, but a difficult task leading to failure for another.

That’s why I like the Peer City Identification Tool developed by the Community Development and Policy Studies department of the Chicago Federal Reserve.

Released three weeks ago, the tool is a powerful online tool that allows policymakers, planners and researchers to truly identify cities facing similar challenges, and in the process find the ones that may have developed appropriate policy responses.

For instance, it reveals that Chicago‘s housing stock peers include a number of smaller Northeastern cities, like Providence, RI, New Britain, CT, and Albany, NY. That puts it in quite a different category than where many urban analysts might put it, in the select group of high-priced and displacement-anxious cities of the east and west coasts.

Surprisingly, Chicago’s housing has less in common with not only major coastal cities like Washington, DC and San Francisco but also its Midwestern neighbors like Cleveland, Detroit, St. Louis, or Milwaukee. This result underscores the value of tool.