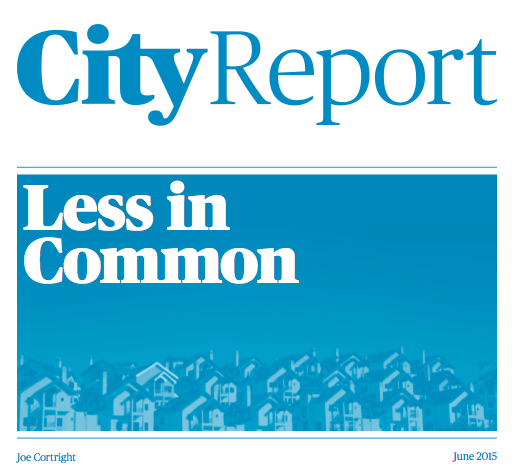 A new report by City Observatory called City Report: Less in Common documents how decades of bad urban planning and excessive automobile dependence have degraded the fabric of society.

The essence of cities is bringing people—from all walks of life—together in one place. Social interaction and a robust mixing of people from different backgrounds, of different ages, with different incomes and interests is part of the secret sauce that enables progress and creates opportunity. This ease of exchange underpins important aspects of our personal lives, civic effectiveness and economic development.

But over the past several decades, a number of trends–some social, some economic, some political, and others technological–have interacted to dramatically change the ways, the places, and the amounts of interaction between different groups in our society. By many measures, we now spend less time in social settings, and are less likely to regularly interact with people whose experiences are different from our own. In our schools, communities, work, shopping and personal activities, we’re increasingly separated from one another.

Our new report, Less in Common, surveys a wide range of measures of how Americans have grown apart from one another over the past several decades.

Many of these changes are reflected in the physical landscape of our cities. In North America, development patterns, particularly the growth of suburbs after World War II, diminished access to an easily shared urban life. Space and experiences became more private, fueled by suburban expansion, large lots, and the predominance of single-family homes. These development patterns have resulted in Americans having “less in common.” This phenomenon appears to play out in many different ways:

There are some counter-trends to the general pattern of isolation and separation. Racial segregation, though still high, has declined steadily for decades. New community spaces—like farmer’s markets—have grown rapidly. Widespread availability of the Internet combined with social media has made it easier and more democratic to connect with others and with all forms of information.

A broadly shared sense of common interest, anchored in a society that promotes social mobility and easy interaction, is a vital underpinning of effective political institutions and the economy. If we’re going to make progress in tackling a range of our nation’s challenges, and live up to our full potential, we need to reinvigorate the civic commons.