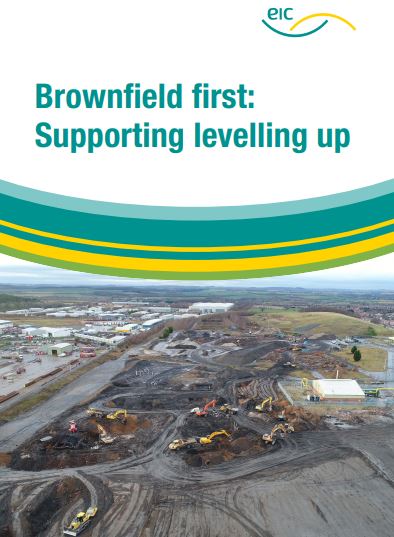 In September of 2021, the Environmental Industries Commission (EIC) published a report that shows why a “brownfields first” national housing policy is necessary to help prevent destructive sprawl. While it focuses on the UK, its lessons are application in almost every nation on Earth.

Here’s the Foreword by Matthew Farrow, Director of Policy at EIC (with minor edits):

For many years official Government policy has been to encourage brownfield (re)development. It is easy to understand why – it makes the most of space that once had a useful purpose and can reinvigorate local communities by turning disused land into much needed homes, parks and commercial developments. At least that is the intention. The reality is that brownfield often remains an untapped resource with developers preferring the perceived simplicity of greenfield sites. The lack of economies of scale, technical difficulties inherent on some small sites, and the additional costs and uncertainties involved in remediating ground contamination, are often viewed as barriers to brownfield development.

However, if we are to meet Government’s longer term ambitions on issues such as housing and levelling up, then brownfield needs to become part of the solution, whether its about finding the space to meet our national housing targets of 300,000 homes a year, or bringing new investment to traditionally underfunded towns, cities and communities.

Furthermore, the availability of brownfield in the former heavily industrialized heartlands of the North West, Midlands and North East, means any plan to revitalize the local built environment in those regions will have to include a key role for for brownfield.

Our report outlines a series of realistic proposals to encourage brownfield development. These include changes to the planning regime to ensure new local plans drive targeted brownfield development, increased tax relief to improve the economic viability of marginal projects, and ensuring that the recently announced levelling-up funding incentivizes brownfield.

Taken together, our recommendations will help unlock brownfield’s untapped potential. With more than 20,000 sites currently on local authority brownfield registers – enough for over one million homes and another 30,000 hectares available for non-housing development – the prize is huge.

I would like to take this opportunity to thank the Contaminated Land working group for their input, especially chair Peter Atchison of PAGeoTechnical.