Groundbreaking research released on July 14, 2020 has revealed the regeneration of canals and rivers in cities around the world can positively impact health and health inequalities, leading to a decrease in mortality rates in surrounding locations, and reducing the gap between deprived and affluent communities.

In a global first, the study led by Glasgow Caledonian University in partnership with Scottish Canals and facilitated by The Data Lab, revealed a faster rate of decline (3% annually) in mortality rates in urban areas close to canals that have undergone major transformation and regeneration, compared to areas further away.

The research, which looked at the impact of regeneration along the Forth & Clyde Canal in North Glasgow—one of Europe’s most deprived areas—highlights the significant physical and mental wellbeing benefits that can be achieved from investing in regenerating urban waterways globally. 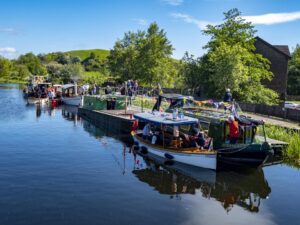 Joe FitzPatrick, Minister for Public Health, Sport and Wellbeing said “Access to outdoor space for recreation and physical activity is essential for our health and wellbeing. Scotland’s canals are a great asset and I welcome this research from Glasgow Caledonian University that suggests that canal regeneration in North Glasgow has been associated with a positive impact on health, health inequalities and a long-term reduction in mortality rates for communities living nearby.”

The objective of the study was to provide quantitative data that clearly outlines the link between positive public health outcomes and the regeneration, redevelopment and repurposing of canal infrastructure. It also provides the first evidence of its kind that can now be used to shape policy and future investment decisions by canal and river operators, local authorities and governments globally.

Today, 55% of the global population lives in urban areas, a proportion that is expected to increase to 68% by 2050. Waterways are part of the urban fabric of most cities, as can be found in Scotland where 1.5 million people live within 3 kilometers of a canal.

“The world is becoming increasingly urban and this poses serious challenges, not only for our health but also the climate. Most cities in the world are built around water whether this is canals, rivers or coasts and these blue spaces are underused assets for public health,” said Sebastien Chastin, Profession in Health Behaviour Dynamics at Glasgow Caledonian University.

“Our research focused on North Glasgow as this is one of the areas in Europe with a unique concentration of health issues and health inequalities. Furthermore, 18 years ago the waterways around Glasgow were entirely derelict and so we were able to track their effect on local people, from full disuse to full regeneration over almost two decades,” he added. “This study demonstrates that urban blue spaces when they are developed, invested in and properly managed can have substantial impact on population health around the world as the model is replicable in most cities elsewhere.”

Recognizing that urban waterways are underused assets that could have potential positive impacts on climate adaptation, public health, social cohesion and recreation, European policies have called for their rejuvenation.

By repurposing and redeveloping the large and dense network of urban waterways across European cities to create attractive environments, it is hoped that recreation and physical activity will be encouraged, fostering social interactions and stimulating business investment and tourism.

The reopening of Scotland’s canals in 2001 and subsequent Scottish Government funding over the last 18 years has been the catalyst to unlocking £1.53 million of public and private investment across Scotland, transforming canal corridors and supporting some of Scotland’s most challenged communities. 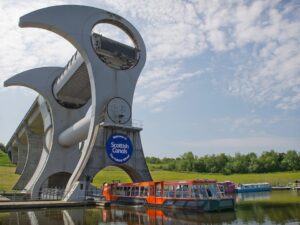 Catherine Topley, CEO of Scottish Canals, said “Scotland’s canals have been transformed over the past 20 years thanks to public and private sector investment, creating significant economic value in the form of new houses, jobs and business growth. This exciting new research shows that this investment which has transformed the Forth & Clyde Canal in North Glasgow has also had a major impact on the health and wellbeing of people who live near the water.”

“Canal authorities around the world, from the United States to China and Europe, have all been trying to understand the relationship between regenerating our inland waterways and people’s health. We are delighted that Scotland now has the knowledge which can be exported to colleagues internationally, demonstrating once again that Scotland’s canals are at the forefront of innovation,” she explained.

With an overriding mission to change how Scotland, and the world, innovates with data through collaboration, The Data Lab, Scotland’s Innovation Centre for Data and AI, funded the research project which was built on a longstanding relationship between Glasgow Caledonian University and Scottish Canals.

Gillian Docherty OBE, CEO, The Data Lab, said “Scotland’s canals offer a variety of unique health benefits to those living nearby, and for economically disadvantaged communities across the country where health inequality is an urgent issue, the regeneration of these disused urban blue spaces is vital as the data science produced from the recent research demonstrates.”

“Not only can these findings inform canal authorities about how best to invest in regeneration in order to deliver the biggest improvement in health among local people living close to canals in Scotland, they can be adopted by authorities globally, making this unique research the first of its kind,” she continued. “We’re proud to be involved in this groundbreaking project and look forward to witnessing how these initial findings can pave the way for future urban blue space regeneration in the years to come. It is another fantastic example of data being used as a force for good.”

Placing a focus on the Forth and Clyde Canal located in North Glasgow, the recent study analysed the effects of living within close proximity to the canal on mortality rates from 2001 to 2017.

During the 17-year period of the canal’s regeneration, which has included the creation of a world-leading Smart Canal urban drainage system as well as the development of the Royal Conservatoire of Scotland, National Theatre of Scotland and Scottish Opera, residential areas next to the Forth and Clyde experienced a faster decline in mortality rates compared to those located further from the canal.

Following the extensive regeneration project, Forth and Clyde Canal is now a vibrant and emerging destination which boasts world-class cultural and artistic talent, a cutting-edge urban sports hub and an array of major development and investment opportunities. As a catalyst for change, this historic canal will continue to drive the future of prosperity of the area, from Port Dundas and Possil to Maryhill and beyond.

While the findings support the notion that regeneration of disused blue and green assets can have a positive impact on health and health inequalities, the research now needs to be taken to the next level.

Future studies using larger samples of individual-level data, including environmental, socioeconomic and health variables are required to ascertain which specific elements of regeneration are the most effective in promoting positive public health outcomes.

All photos courtesy of Scottish Canals.

See the full findings of the research.