Unbridled coastal development and rampant climate change-powered storms are greatly increasing the risk of flooding for communities along the U.S. Gulf Coast, as anyone who follows the news already knows.

What too few people know is that restoration of marshes and oyster reefs are among the most cost-effective solutions for reducing those risks, according to a new study. 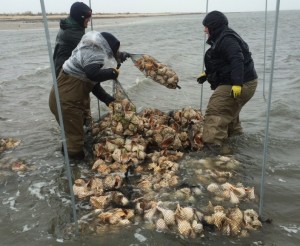 Published on April 11, 2018 in PLOS ONE, the study compares the cost effectiveness of nature-based and artificial solutions for flood reduction across the Gulf of Mexico.

The results clearly demonstrate the value of nature-based solutions such as marsh and oyster-reef restoration.

Overall, wetland and reef restoration can yield benefit-to-cost ratios greater than seven to one, meaning more than $7 in direct flood-reduction benefits for every $1 spent on restoration.

Many artificial solutions (such as levees and home elevation) have benefit-to-cost ratios near or below one-to-one; their benefits can be high, but they are expensive to implement at scale.

The study was led by researchers at UC Santa Cruz, the Nature Conservancy, and the Swiss Federal Institute of Technology at ETH Zurich. It applied the Economics of Climate Adaptation (ECA) approach, which was developed by reinsurance company Swiss Re and partners to understand what drives coastal risk and to evaluate the cost-effectiveness of adaptation options.

Coastal risks are increasing from both development and climate change. Interest is growing in the protective role that coastal nature-based measures (or green infrastructure), such as reefs and wetlands, can play in adapting to these risks. However, a lack of quantitative information on their relative costs and benefits is one principal factor limiting their use more broadly. Here, we apply a quantitative risk assessment framework to assess coastal flood risk (from climate change and economic exposure growth) across the United States Gulf of Mexico coast to compare the cost effectiveness of different adaptation measures.

These include nature-based (e.g. oyster reef restoration), structural or grey (e.g., seawalls) and policy measures (e.g. home elevation). We first find that coastal development will be a critical driver of risk, particularly for major disasters, but climate change will cause more recurrent losses through changes in storms and relative sea level rise.

By 2030, flooding will cost $134–176.6 billion (for different economic growth scenarios), but as the effects of climate change, land subsidence and concentration of assets in the coastal zone increase, annualized risk will more than double by 2050 with respect to 2030. However, from the portfolio we studied, the set of cost-effective adaptation measures (with benefit to cost ratios above 1) could prevent up to $57–101 billion in losses, which represents 42.8–57.2% of the total risk.

Nature-based adaptation options could avert more than $50 billion of these costs, and do so cost effectively with average benefit to cost ratios above 3.5. Wetland and oyster reef restoration are found to be particularly cost-effective.

This study demonstrates that the cost effectiveness of nature-based, grey and policy measures can be compared quantitatively with one another, and that the cost effectiveness of adaptation becomes more attractive as climate change and coastal development intensifies in the future. It also shows that investments in nature-based adaptation could meet multiple objectives for environmental restoration, adaptation and flood risk reduction.

Read full report in PLOS One.