A new project spearheading rapid and massively upscaled rewilding will be launched by Rewilding Britain later this year, to tackle the nature and climate emergencies, and help boost green recovery from the Covid-19 crisis.

With nature faring worse in the UK than in most other countries, and many people wanting Britain to ‘build back better’ from the coronavirus pandemic, the charity’s new Rewilding Network will aim to create a rewilding snowball effect by bringing together hundreds of people from across Britain – including landowners, farmers, land managers, community groups and local authorities – who are rewilding land or considering doing so. 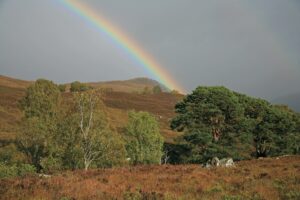 Rainbow over Dundreggan in the Scottish Highlands, Trees for Life’s flagship rewilding project.

Initially the Network will aim to catalyze and support the rewilding of at least 300,000 acres of land—an area the size of Greater Manchester or North York Moors National Park—plus marine areas within the next three years.

Rewilding Britain says bold action is needed to reverse the collapse in UK wildlife, which has left 56% of species in decline and 15% threatened with extinction, and to tackle climate breakdown. Red squirrels, capercaillie, and pollinating insects such as the great yellow bumblebee are among many species facing a bleak future, while returns or rebounds of species like beavers, sea eagles and pine martens are happening slowly.

“We need to hit the reset button for our relationship with the natural world, and rebuild our lives and economies in ways that keep nature and us healthy,” said Rebecca Wrigley, Rewilding Britain’s Chief Executive.

“Our Rewilding Network will help propel rewilding to a whole new level – so we can all begin to enjoy a Britain rich in wildlife again, with healthy living systems soaking up millions of tonnes of carbon dioxide, and our lives enriched by wild nature and strong resilient communities, regenerative farms and nature-friendly businesses,” she added.

Interest in rewilding has boomed and is at levels never seen before. Rewilding Britain is now receiving unprecedented levels of requests for guidance. Over the last year alone, this has included over 50 landowners and partnerships with almost 200,000 acres of land between them, and thousands of smaller-scale land managers, gardeners, individuals and local groups.

The many farms and projects liaising with Rewilding Britain include Wild Ken Hill farm in Norfolk, which is rewilding 1,000 acres – alongside managing 2,000 acres of regenerative agriculture and 500 acres of freshwater marsh – to benefit people, wildlife and the climate. It aims to show how rewilding can improve air and water quality, and help farmers reinvigorate their businesses.

In Dumfries and Galloway, the Langholm Initiative charity aims to create a new nature reserve on Langholm Moor by purchasing 10,500 acres of wildlife-rich and culturally important land—jointly valued at £6 million—from Buccleuch Estates, in one of Scotland’s largest community buyouts. 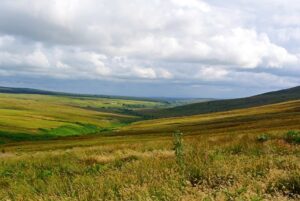 But while increasing numbers of people across the country want to rewild or help others rewild, there are many who don’t know how to get started, lack information or don’t know if others in their area are also rewilding. Rewilding Britain has already been connecting up landowners in an informal way in places such as Cornwall, Oxfordshire, Yorkshire and southern Scotland, and the potential for collaborating and sharing ideas is clear.

Those with land – farmers, charities, government bodies and others – often also need support to get things set up for nature to recover in a way that also boosts livelihoods. Despite reasonably good advice available for farmers, landowners and land managers about nature-friendly farming, there is currently no coordinated service providing advice on how to rewild and build new enterprises around this.

As the primary “go-to” rewilding hub, the Rewilding Network will harness the growing enthusiasm for rewilding and support projects of all sizes and all stages of rewilding by providing expert practical help and advice, and being a place for discussion, sharing knowledge and ideas, and developing community action.

Currently under development for a late 2020 launch, the Network will catalyze larger and better-connected rewilding areas, and ensure more opportunities for people to get involved in rewilding – whether on their own land, by setting up local groups, or by volunteering with others.

Rewilding Britain has launched a crowdfunding appeal to raise £25,000 to cover the Network’s start-up costs – including the creation of an innovative online resource offering individual support, videos and webinars, and for strengthening connections between rewilding projects countrywide.

Much of the Network’s information will be free to access. Details of membership subscriptions are currently being worked out through consultation with interested potential members and others.

“Rewilding is about letting nature do its thing and take care of itself, but it’s also about people. People lie at the heart of rewilding, and people need to choose to rewild to make it happen. The Rewilding Network will be Britain’s first learning and action network dedicated to supporting people who want to put rewilding into practice,” concluded Wrigley.

Restoring nature on a huge scale across Britain’s land and sea – including native forests and woodlands, peatlands, rivers, moorlands and saltmarshes, while boosting nature-friendly farming – can be achieved without loss of productive farmland.

Rewilding Britain wants rewilding to flourish across Britain – to tackle the climate emergency and extinction crisis, reconnect people with nature, and inspire individuals and communities through new opportunities that help them thrive.