Scotland Yard (officially New Scotland Yard) is a metonym for the headquarters of the Metropolitan Police Service (MPS), the territorial police force responsible for policing most of London, England. 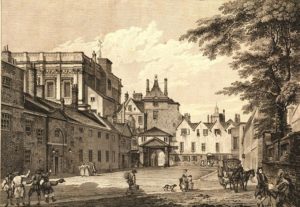 The name derives from the location of the original Metropolitan Police headquarters at 4 Whitehall Place, which had a rear entrance on a street called Great Scotland Yard.

The Scotland Yard entrance became the public entrance to the police station, and over time the street and the Metropolitan Police became synonymous.

Just as Wall Street gave its name to New York’s financial district, so too did Scotland Yard became the name for police activity in London. 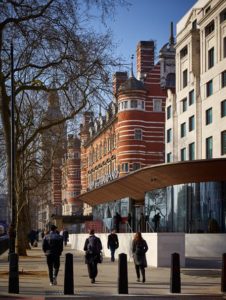 In summer 2013, it was announced that the force would move to the Curtis Green Building – which is the third building of New Scotland Yard’s previous site (1890–1967) – and that the headquarters would be renamed Scotland Yard. In November 2016, MPS moved to its new headquarters, which continues to bear the name of “New Scotland Yard” because the famous sign–which spins around non stop and it has a camera inside it–was relocated from the previous building. 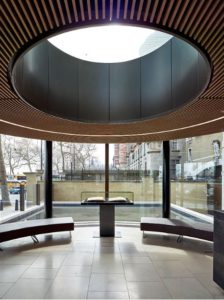 Relocation to this greener, smaller building is expected to save London about £6 million per year in operating costs. The green retrofit of the Curtis Green Building was performed by architects Allford Hall Monaghan Morris (AHMM).

AHMM’s design for New Scotland Yard is a radical remodelling and extension of the Curtis Green Building, a 1930s building on the River Thames Embankment, which was an earlier home of the MPS. The core objectives of the brief were to create modern, flexible and efficient office environments, extend available floor space and facilitate agile working with more interaction between staff.

The design has transformed the building with the addition of an elegant curved glass entrance pavilion and rooftop pavilions and a reworking of the existing accommodation. 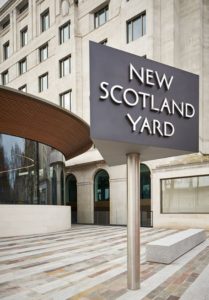 The scheme has expanded the building’s floor area from 8,691sqm to around 12,000sqm through extensions to the rear, roof and front concourse. The contemporary design of these complements and enhances the architectural features of the original building and the materials, colours and proportions of neighbouring Whitehall buildings. Inside the building, AHMM has created a flexible office environment to facilitate collaboration and interaction.

The rooftop extension provides multi-use conference space and terraces, and is illuminated to give presence at night, symbolising the 24/7 nature of the building along with its civic purpose.

A brick ‘carpet’ in the landscape outside the entrance references the distinctive striped brickwork of the neighbouring Norman Shaw North building, while the Eternal Flame has been set within a contemplation pool south of the entrance pavilion.

All photos courtesy of AHMM.