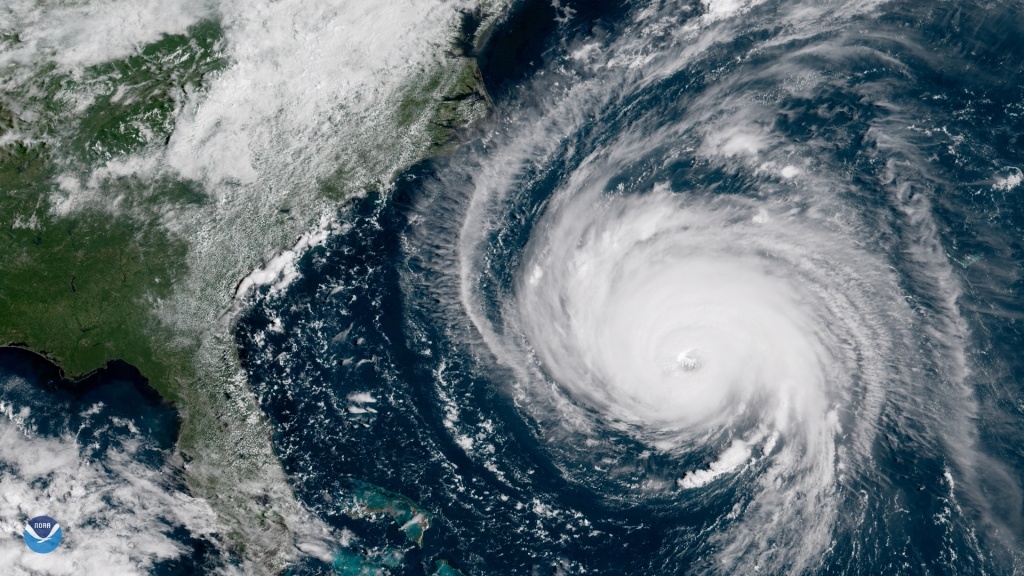 A new study of the ecological impacts of hurricanes addresses a question that people have asked for centuries: when confronted by a storm, is it better to be resistant like an oak or resilient like a willow?

The findings were reported in the March 2, 2022 issue of Science Advances, can help guide managers as they plan for climate change and a growing coastal population threatened by tropical storms that are more intense and track farther into temperate latitudes. The findings also provide a framework for guiding management decisions related to other disturbances, such as nutrient pollution or wildfires.

Patrick illustrates these management trade-offs with an example from his role as director of the Seagrass Monitoring and Restoration Program at VIMS.

“In the Chesapeake Bay,” he says, “eelgrass tends to be more stable through time than widgeon grass, but takes longer to recover from disturbances such as hurricanes. This trade-off, which would also apply to diebacks from water quality or heat stress, is an important consideration for coastal managers when choosing which species of seagrass to restore.”

The research team comprises 23 scientists from 11 states, Puerto Rico, and Taiwan. Their study is linked to a research coordination network funded by the National Science Foundation to synthesize knowledge concerning ecosystem responses to hurricanes. Co-authors and members of the network’s leadership team include Drs. John Kominoski of Florida International University, Bill McDowell of the University of New Hampshire, and Beth Stauffer of the University of Louisiana at Lafayette.

A repeated pattern of resistance/resilience trade-offs

All told, the researchers used pre- and post-storm monitoring surveys to analyze patterns of ecosystem resistance and resilience from 26 Northern Hemisphere storms. These made landfall between 1985 and 2018 in states from Texas to North Carolina, as well as in Puerto Rico and Taiwan.

The researchers gauged storm characteristics and impacts via total rainfall, maximum rainfall rate, and windspeed; then grouped their study areas into four ecosystems (freshwater, saltwater, wetland, and terrestrial) and five “response categories,” for a grand total of 4,138 time series. The response categories documented post-storm changes not only in the distribution and abundance of living things — populations of mobile animals such as fishes, sedentary animals such as oysters, and vascular plants such as mangroves — but in the ecosystem’s biogeochemistry (e.g., salinity, nitrogen) and hydrography (e.g., depth and shoreline position).

“Our study revealed a repeated pattern of trade-offs between resistance and resilience across categories,” says Patrick. The authors note these patterns are likely the outcomes of evolutionary adaptation and conform to ecological-disturbance theories, suggesting that consistent rules govern ecosystem susceptibility to tropical cyclones.

As one example, the researchers cite the fate of Jamaican forests following Hurricane Gilbert. When this intense category 5 storm crossed the island in 1988, it devastated stout, normally resistant species such as the Jamaican treefern, allowing myrtles and other weedy, shrubby species to colonize now-open gaps in the canopy.

In another example, when Hurricane Harvey struck Texas in 2017, erosion from this category 4 storm cut deep channels within local coastal wetlands, favoring recovery by the taller saltmarsh cordgrass over shorter marsh species, while wetlands dominated by mangroves experienced less erosion than marshes.

Hurricane Harvey also decreased the biomass of coastal phytoplankton in the waters off the Texas coast, and shifted which groups were dominant. Such changes in the community structure of microscopic organisms — the base of aquatic food webs — can affect how much energy is available for larger organisms that are ecologically and economically important in the region.

The team’s findings suggest that managers seeking to enhance both resistance and resilience in coastal ecosystems may face an impossible task. On the other hand, their findings provide valuable guidance for choosing the single most effective management strategy for a particular location.

“If you can’t manage for both resistance and resilience,” asks Patrick, “which should you focus on? The answer depends on both specific project goals and the expected intensity and frequency of disturbance events.”

Under a relatively static, predictable climate, resistance would generally be the better restoration strategy in areas with infrequent disturbance.

“Under this scenario,” says Patrick, “managers would ideally select resistance as the main feature of their restoration strategy, so that the function you’re interested in — slowing coastal erosion, preserving water quality — doesn’t waver when it gets knocked by a big disturbance.”

Managers might, for instance, choose to plant mangroves rather than marsh grasses to protect against coastal erosion, as mangroves are more resistant to large storm waves.

However, when and where conditions are changing, resilience may emerge as a better option. Says Patrick, “If disturbances are going to be more severe, more frequent, or both — outstripping the potential resistance of a particular species — managers might focus on resilience so that recovery time following disturbances is quick.”

“If it takes 25 years for one tree species to grow large enough to resist the average hurricane, but hurricanes now start impacting an area every 20 years, it’s probably a waste of effort to try to cultivate it,” he adds. “The best restoration strategy depends on the frequency and intensity of disturbance events both now and in the future.”

As one of the first comprehensive studies of the ecological impacts of tropical cyclones, the team’s analysis raises as many questions as it answers, and points to several important areas for future research by the group, formally known as the Hurricane Ecosystem Response Synthesis Network, or HERS.

Future research areas — guided by a HERS steering committee — include studies of how species traits such as reproductive potential, dispersal mode and distance, and physiological tolerance might explain patterns of resistance and resilience at the population level; or how an ecosystem’s long-term or recent environmental history might influence its response to subsequent disturbances.

For instance, scientists believe 1972’s Hurricane Agnes was particularly disruptive to seagrasses in the Chesapeake Bay because it arrived in June, before most species had gone to seed. With greater knowledge of previous conditions, managers could better evaluate an ecosystem’s likely sensitivity to a forecast disruption.

Patrick concludes, “Future studies will enhance our ability to understand how local human stressors like nutrient pollution might interact with global stressors like climate change to influence a specific ecosystem or locality, and thus help target efforts to enhance coastal resilience or resistance.”

Another key area for future HERS research is determining the stability of highly developed coastal ecosystems in the face of tropical cyclones.

This article by David Malmquist originally appeared on the website of the Virginia Institute of Marine Science (VIMS). Reprinted here (with minor edits) by permission.