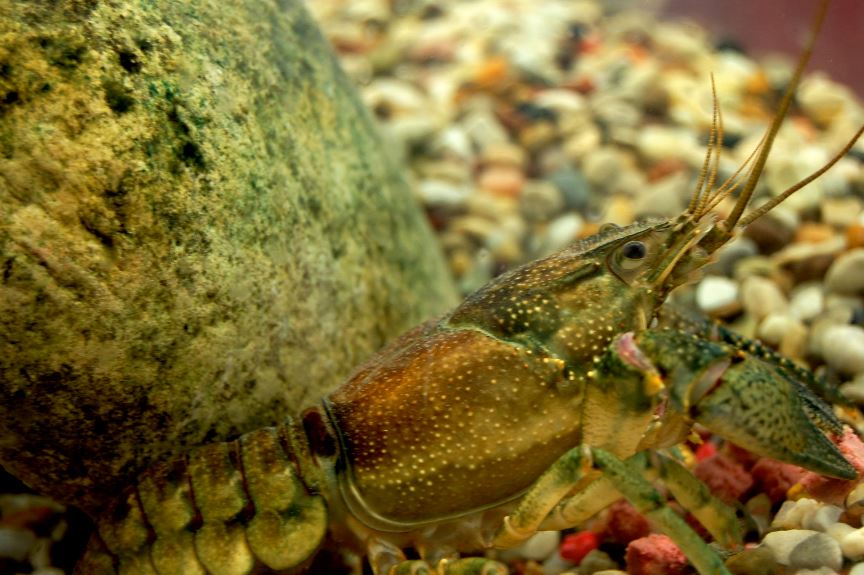 While macroinvertebrates are a tasty food source for crayfish, a new study reveals a surprising finding: When crayfish were present in in-stream experimental enclosures, macroinvertebrate density was higher, not lower.

As the crayfish disturb the rock and gravel bottom with their claws, they agitate and increase suspension of fine sediments, presumably allowing more sediments to flow downstream.

Many macroinvertebrates don’t like to live in streams with high sediment loads. It’s a type of pollution that degrades freshwater streams and can be traced to land-use changes like agriculture and development.

The study, “Effects of Invasive Crayfish on Fine Sediment Accumulation, Gravel Movement, and Macroinvertebrate Communities,” was published in Freshwater Science.

ABSTRACT: Crayfish are one of the most prolific freshwater invaders, yet the role of crayfish as ecosystem engineers that structure benthic substrates in their nonnative habitat is rarely studied. We used an in situ experimental manipulation to document changes in sediment dynamics and macroinvertebrate density and richness caused by the presence or absence of invasive rusty crayfish (Orconectes rusticus).

Our findings suggest that rusty crayfish, which are spreading throughout the northeast USA, are probably important engineers of physical habitat structure in stream ecosystems. Rusty crayfish may also have unexpected, facilitative consequences for other benthic species by reducing fine-sediment accumulation in streams that are sediment impaired. Our study illustrates that biological forces can influence benthic gravel-size distributions and topography and suggests that crayfish may be important drivers of substrate-sorting dynamics and disturbance regimes, with consequences for community structure in streams where they are invasive.

From Wikipedia: The rusty crayfish, Orconectes rusticus, is a large, aggressive species of freshwater crayfish which is native to the U.S. states of Indiana, Kentucky, Ohio, and Tennessee. Its range is rapidly expanding in North America, displacing local native crayfishes in the process: it is known to have reached New England, Ontario, Illinois, Wisconsin, Michigan, Minnesota, Iowa, Missouri, Colorado, New Jersey, New York, Pennsylvania, Maryland, and even Manitoba.