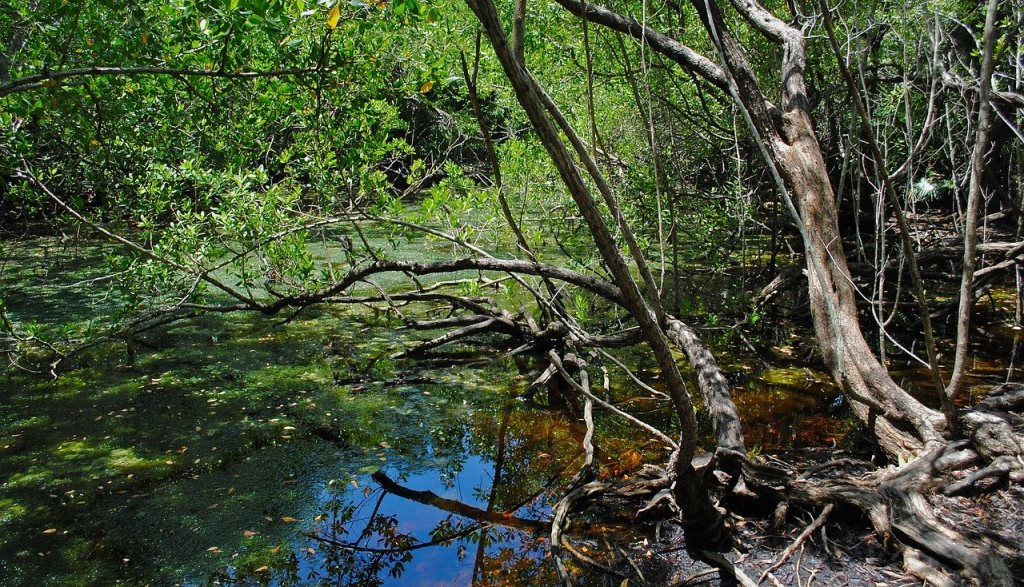 Coastal risks are rising and at the same time we are losing coastal habitats, like mangroves, which can function as a first line of defense for coastal communities.

A newly-published study from The Nature Conservancy and the University of California – Santa Cruz used an insurance industry catastrophe model to quantify the economic benefits of mangroves in Florida for reducing coastal flood damages annually in Collier County and from Hurricane Irma, which impacted Florida statewide in 2017.

The following is the Executive Summary of that report:

To quantify the value of mangroves in reducing average annual property losses in Collier County, we modeled annual surge-related losses under two scenarios: “With Mangroves” and “Without Mangroves”. The difference in losses between the two scenarios represents the averted damages (i.e., benefits) provided by current mangroves.

To quantify the flood damage reduction benefits of mangroves during Hurricane Irma we similarly estimated surge-related losses during the event for the two mangrove scenarios. To quantify surge-related flooding and losses, we first estimated storm-surge flooding (extents and heights) from each coastal storm by coupling a parametric hurricane wind-field model with a 2-D hydrodynamic flood model.

The physical effect of mangroves on flood reduction was represented using a friction coefficient within the flood model. Flood damages were then estimated by combining the flood extents with an extensive property exposure and damage database. We also estimated the number of people that benefited from flood reduction by mangroves using public census datasets.

The results of this work show that mangrove forests in Florida provided significant flood damage reduction benefits annually, across multiple storms, and during catastrophic events like Hurricane Irma. In Collier County, mangroves reduced annual flood risk by 25.5% to properties behind them. Many areas in the county received over $1 million in benefits every year in flood damage reduction benefits due to the mangroves in front of them.

The value of mangrove forests during Hurricane Irma was also very high. Mangroves averted $1.5 billion in storm damages, amounting to a 25% savings in counties that have mangroves. They also protected more than 626,000 people across Florida.

Not surprisingly, some of the highest percent of benefits occurred in areas where there are larger swaths of mangroves remaining and moderate development. Nonetheless, significant benefits did occur in areas where only small belts of mangroves remain in some of the densest urban corridors. Most of the estimated benefits of mangroves during the Hurricane Irma surge were concentrated in regions of southeast and southwest Florida that have a unique combination of large mangrove extents in front of high densities of people and properties.

Almost all of this risk reduction took place in Lee and Collier counties, where Irma made landfall on the mainland. In these counties, mangroves are predicted to have reduced damages to properties during the hurricane by over $1.2 billion. There are some areas where mangroves potentially increased flooding and flood losses, for properties that were built seaward of these natural defenses.

Overall, we found that the flood reduction benefits of mangroves are substantially higher than the benefits of salt marshes in the northeast that we found in a prior study using similar models (Narayan et al., 2017). These findings show that it is important to properly account for coastal habitats like mangroves within flood risk models in order to properly characterize coastal risks to people and property.

The findings of this study make a strong economic case for protecting Florida’s remaining mangroves and restoring mangrove areas as a risk reduction strategy. The results point to the high value of mangroves as natural capital and national risk reduction infrastructure both in tropical areas where they already exist and in more temperate regions across the Gulf of Mexico where mangroves are currently expanding their range.

The flood reduction benefits of mangroves are sizeable enough to inform habitat restoration priorities and nature-based risk reduction strategies. These opportunities could include pre-hazard mitigation and disaster recovery spending on mangroves, green municipal bonds to fund restoration, and potential premium reductions from public and private insurance plans for mangrove conservation and restoration.

Photo of mangrove forest in Marathon (Florida Keys) is by Lisa Larsen from Pixabay.